Roll 'm Up
for PC (Windows) 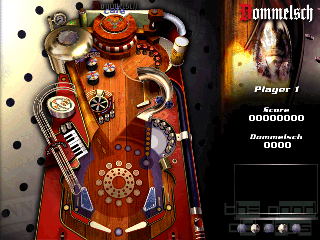 Pinball games were the big hype for some time some years ago. It was all started by 21st Century Entertainment with their Pinball Dreams. In the following years, every company produced similar games in masses, most of them without any innovation as usual. But they were all commercial, sold for the 'normal' price of 50$ for one game including between merely one to up to four tables. The question how such a ridiculously high price can be justified was already valid back then.

In 1999, when the pinball flood was already long over, Dommelsch came up with their version of the concept. Again one single table. But for free! Can a free game compare to its commercial competitors though?

There are a few standard points which determine the quality of a pinball game. First the ball physics. The ball should act as realistically as possible in every possible situation. This is not really the case in Roll 'm Up. It feels as if the ball would be weightless or at least extremely light! I'm certainly not a pinball expert, but no metal ball can change its direction and speed that quickly! The effect of this is that the game is very hectic. The directions the ball bounces off targets looks ok though.

Next is the quality of the table. Is it balanced? Are the targets thought out and working? Here, we only have one table. It's made realistically, aside from a few curves a real ball couldn't take there's nothing you couldn't do in reality. On the one hand, this can be nice because extremely overdone effects can feel silly. On the other hand, this is a computer game, so why not take advantage of its possibilities? The programmers of Roll 'm Up didn't. But it's a question of personal taste whether to like this or not.

The table's theme is a pub, wood is dominating. it's looking good, the graphics are nicely rendered, but also not too flashy or artificial. The perspective you see the table from doesn't look completely right though. The bottom is seen from the very top, above that it's all bendy. Being in action, you won't notice this very much though.

There are the usual targets and lines the ball can take. These aren't too much interconnected unfortunately, so hitting something usually just does what it does there but doesn't open up new possibilities or boni. Only one boring 'hit those targets one after another' is existing.

One last downpoint about the table though: the middle is a kind of bottle neck, it's very crowded there. It just happens too often that the ball simply doesn't reach the top but bounces back from somewhere near the bottom - with full speed because of the weird physics. Frustrating.

Despite all these negative aspects, there are some extras which can easily compare to the ones in commercial games. There's an extra paddle in the upper half, very good option. Ball-locking and playing multi-ball is great fun! Pushing the table to get the ball 'back from the dead' combined with the danger of a tilt if you shake it too much is a common option and well done here. But there's even one thing which no other pinball game offers: a global highscore list on Dommelsch's site! You can upload your stats directly from the game to their website. Checking there, it's obvious their games have developed a big community of faithful followers - your competitors!

Another thing is important. This is a promotional game. How annoying is the advertisement level? You won't notice it! A logo somewhere on the table and in the menu - that's it. Thanks, Dommelsch! The game's predominant language is English, but you might stumble upon a Dutch word every now and then. Don't be confused, you won't miss anything important.

Overall, Roll 'm Up may not be the best pinball game, but it's certainly worth a look. Or another. Especially considering how it ridiculed all those commercialy games which are not more or even less fun!