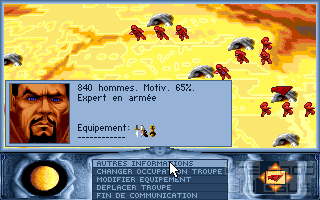 Licencing deals to adapt a popular franchise into another medium rarely have to do with artistic vision. Rather, it's just the big name which is tempting. For sure, the novel Dune has to be considered amongst the worst choices for adaptation. The abundance of characters, the changing narrative viewpoints, the manifold complex themes, the long-wided inner monologue… Nevertheless, a movie had been made in the mid-80s. By the early 90s, Virgin Interactive considered it ripe for a computer game version and gave the job to the newcomers of Cryo. Who, after a brief period of development hell, delivered eventually. 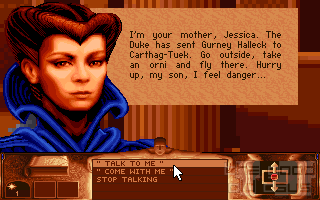 Oh, thanks for the reminder!

And what a game it is they delivered! Beginning the scenario with Paul Atreides' arrival on Arrakis, narrowing the narrative to his point of view, the game does a fine job drawing its player in. Giving them simple things to do first, clear tasks from the Duke, his mother or one of the main advisors. Then gradually opening up the game world and gameplay scope as things go.

The Atreides have been tasked to harvest the spice, the universe's most important substance, but their archenemies, the Harkonnen, are still present on the planet as well. The trust of the native Fremens has to be won, the Harkonnen saboteurs dealt with, later their direct attacks fended off and finally, a large scale counterattack has to be launched to gain full control of the planet. All while satisfying the emperor's ever increasing demands for spice shipments.

The latter aspect illustrates well how Cryo managed to consolidate gameplay needs into a framework which feels organic with respect to the plot. The need to harvest spice is clearly established through the emperor's demands which, if not met, lead to immediate game over. Every week, the amount he is asking for will increase exponentially, defining an implicit end date to the game and a clear urgency to progress. There is nothing artificial about it and it works beautifully. 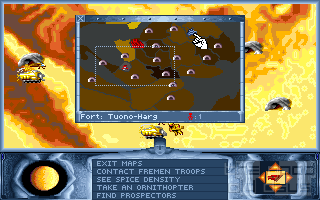 In a similar manner, the initially heavily dialogue-based adventure-like gameplay slowly, initially almost unnoticeably, shifts towards strategic planning. Commanding Fremen groups to different locations to look for spice, harvest it or train their combat abilities. Providing them with equipment either found somewhere or bought in one of the hidden smuggler towns.

Speaking of hidden smuggler towns, they, like the Fremen “sietches” need to be found on the map first. Once again, initially, this exploration is heavily guided, but opens up towards much more free style later on. As far as planning and giving orders are concerned, where initially, Paul has to physically travel and meet each leader, he later develops telepathic abilities to perform such interactions remotely. Both as per the needs of gameplay in each phase (taking micromanagement tasks away as overall responsibilities grow) and fully plot-motivated.

The one occurrence where the unity of storytelling and gameplay breaks is pace of things. Looking back at a successful game in hindsight, major event occurrences feel too frequent, almost cramped. Within few days, the player meets various key characters, falls in love, develops considerable superpowers and essentially turns the whole planet upside down. Likewise, Fremen groups take very short time turning into to expert soldiers, and switching the ecosystem of vast areas of desert into green forests is equally quick. This, of course, is due to reasons of gameplay pace. This not being all too deep and complex, things would have felt heavily dragging otherwise. 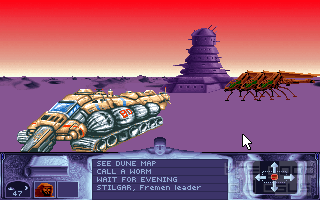 Still some equipment to distribute

Stylistically and content-wise, Dune is a wild mixture of motifs picked from the novel and the 1984 film. Major thematic cuts are of course to be expected, but they managed in a way which still makes some inherent sense. It's even not focussed completely on the externalised action, with some philosophical and religious notions still being hinted at. Some characters have been clearly likened to their movie counterparts. Paul is clearly recognisable as Kyle MacLachlan, Jessica as Francesca Annis and Feyd and Sting. Others not at all. Dr. Kynes, played by almost bald Max von Sydow in the movie, sports wild, long hair and Duke Leto is, not just visually, a decidedly different character than quiet and warm Jürgen Prochnow. The technique of characters whispering to signify inner thoughts has been reused, as well the “weirding modules” (sound-based weapons). The later CD release even included some movie clips.

The genre bending nature of the game received mixed reviews by the press at the time, but nevertheless, the game turned into a solid commercial success. Testaments of its enduring popularity can be found all over the Internet. If anything, it is a game which has actually grown since its first release. The rather lightweight challenge is well adapted to today's player expectations, narrative-driven games have become a normality and the fantasy genre has entered mainstream mindset in the meantime. Even if somewhat limited (particularly, the planet map itself and the initial locations of characters is always the same), it remains well worth playing. Not many games can claim to have aged this well!

Frank Herbert's Dune is one of the best known pieces of fictional literature - beaten only by the bible and a few others. Millions of people have read it and even those who didn't at least know the name because they've seen the movie, they've just heard of it somewhere or they've played one of the computer games.

Dune 2 (and the identical Dune 2000) are the best known of those. And they're also said to be the better part of the 'series'. In many cases the second part of a series is better than its 'ancestor'. But is it really a series? Let's have a look on how these different games came into existance.

Virgin Interactive had bought the book's license. It gave the job to produce a game on this license to two teams: Westwood and Cryo. Cryo finished their version first. Westwood needed a bit more time, so they got the '2' behind the name.

So Dune 2 can't really be called a sequel to Dune. Those were two completely different games developed at the same time! And while Dune 2 was a lot more influential and successful, Dune was much more true to the book.

In the distant future, mighty feudal families (“houses”) rule the universe. The secret of space travel lies in the drug Melange, also known as Spice. With Spice, navigators get the ability to fold space. Owning it is crucial! The problem is that it only grows on one single planet on the whole universe: Arrakis, sometimes also called Dune because it's a vast desert. The only native people who live there are the Fremen who live in tribes.

But there are also 'foreigners' on Dune. The Emporer Shaddam IV has given the 'license' to mine Spice to the House Atreides now after the Atreides' arch enemies, the Harkonnen, had had it for a long time.

The player takes the role of Paul Atreides, Duke Leto Atreides' son. The Atreides have just arrived on Dune, and the Harkonnens don't seem to be willing to give Dune up without fighting for it. It's Paul's job to establish contact to the Fremens, convince them to work for the Atreides and eventually drive the Harkonnen's off Dune.

The game begins in Adventure style. You walk around, talk to people, discover several locations and so on. But once you have some Fremen troops under your command, the strategic component of the game begins. You can order them what to work with, where to go, which equipment to use. But you won't have all the options if you don't have some 'VIPs' being on your side. So the Adventure part also continues in the background.

The action is divided into days, but you don't need any sleep. The Emporer expects constant spice shipments though. And if you can't fulfill his demands, he'll send his elite troops: the Sardaukar. Everything's in real time, so mining spice, moving armies and traveling all take time.

During the game, you'll meet a lot of different and interesting characters. Some are more helpful, some less. But they all help to fully unfold the plot! Everything's in there: a conspiracy, honour and friendship, family trouble, politics and even a love story. Yes, that's right: Dune is one of the very few games to include something like that!

Just as important is the gameplay. And this is very well thought out! Both the Adventure and the strategic part are very well done. And the strategic part is even real strategy and not a carmouflaged action game like Dune 2. The only downpoint is that it's not too replayable. But that's the price of a gripping storyline... 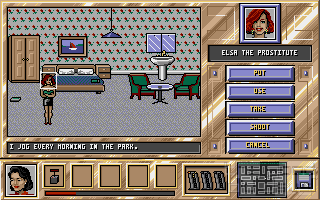