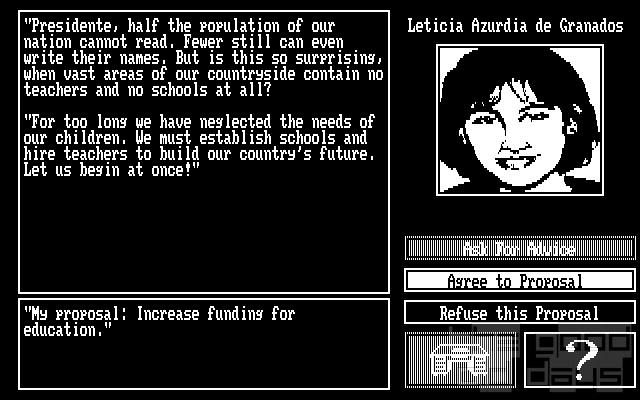 Regarding the topic, this is one of the most original games ever. It belongs to the once almost nonexistant and now completely deceased genre of politic simulations. While most representatives of this limit themselves to foreign affairs, Hidden Agenda concentrates mainly on domestic policy and its effect on international relationships.

The plot is as following: The dictator of a small Latin American country who brutally opressed people has just been overthrown. The player is chosen as president. That means it is you who has to decide everything but there are different lobbies who try to influence you.

First there are the three political parties. You do not belong to one but you appoint their members to ministers. These ministers then suggest things that they think are necessary in their ressort. You do not have to follow them and you can get advice from the other ministers as well but there are always only the options “accept” or “decline”. You cannot create your own alternatives. That is kind of troublesome if you want to cut down the military budget for example, and nobody mentions this topic.

The three parties represent contradictory political ideologies. “National Liberation” wants to create a socialist country, while “Popular Stability” wants to save the status quo. “Christian Reform” is somewhere in the middle. So it does not make much sense to appoint people from completely different groups.

Beside that, there are representatives of different lobbies like cotton producers, factory workers or even ambassadors from other countries. Because the game takes place in the time of the cold war, they are from the USA, the USSR and Cuba.

The countries main problem is poverty. As president you are in a difficult situation: If you help the starving farmers, the exporters and the USA will complain. The debts will grow gradually. On the other hand, if you want to consolidate the state's finances, there will be riots quickly because the population wait for some improvement.

That is one of the two problems of the game: the level of difficulty. It is extremely hard to satisfy everybody. A choosable difficulty level would be a huge advantage. The other weak point is the lack of change. Everytime you restart there are exactly the same persons and situations like before. At least a few little variations would not have done any damage.

As you can see on the screenshots, the game is very much text based. You have to read VERY much. If this does not frighten you, you will have fun with Hidden Agenda for month or even years. In spite of the disadvantages it is extremely motivating. You will be very frustrated but you will start it again everytime!

The author lets you download the game for free from his website. This is a great thing to see, so head over there and give him your thoughts about his masterpiece! 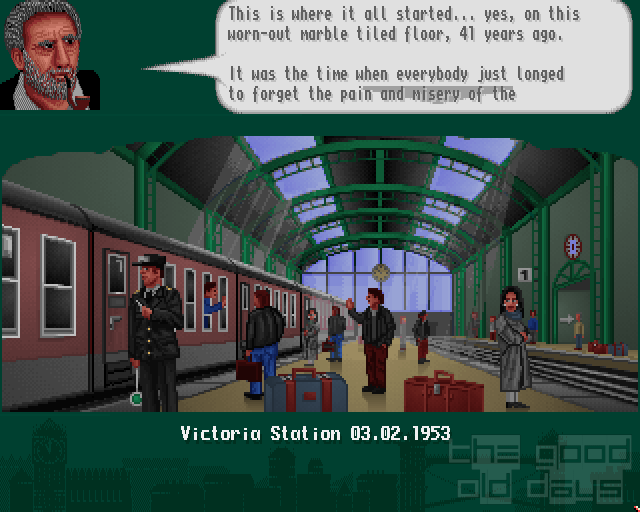