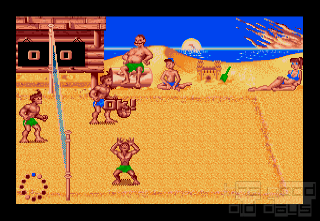 Yay, it's summer! Dig out your bathing shorts / suit, jump in the car and head for the beach. And hope you are one of these good-looking sport-types to avoid being laughed about. Or alternatively, hope there are even fatter people than you to keep the attention away from the result of your beer sessions. Hiring some people with visible mutations could also help...

But let's assume you're not that brave. Do you have to do without the water, the fresh air, the sand and the sun? Well, yes. But at least you can simulate beach life on your Amiga to pretend you moved your body a bit! And if you already take the effort, why not take it to the extreme and pretend to do some sport? After that, you could safely stop any movements for the next few weeks without getting a bad feeling - after all, you have done some training!

So if you're up to it, Beach Volley is a highly recommended choice! It is a near perfect 'simulation' of this sport. In case you're not sure about the beach part of the name, a quick overview: Unlike 'real' volleyball (and I won't explain what that is), beach volley is played with only two players per team. A point is awarded with each service, not just to the team which currently serves. The field is smaller and it usually consists of.... surprise, surprise.... sand! So it is a quicker, more action-packed variation of volleyball.

This computer game lets you play against the best teams in a world-wide tournament. Unfortunately, you only get a short glimpse of each of the countries you visit, you always rush to the court and play because this is where the action starts: the team on the left side (good) against the identical looking team on the right side (evil)! With clever 'shots', you try to make the ball unreachable for the opponent. In defense, you try to block their smashes, make despaired jumps to reach the ball in the last second and so on. All that to reach seven points before the other team does.
As if that wasn't enough (it would be, but I'll come to that later), you have to beat the others in a very limited amount of time. Once time is up, not the team with currently more points wins, but you always lose. Not very fair.

The controls are very intuitive and the 'AI support' (the computer always controls the player of your team who touches the ball second, so that you can always deliver the smash or whatever you've planned) is flawless. The learning curve is low enough to get a good start and it rises enough to keep you occupied for some time. This is all almost perfect.

There is one huge downside which has already been mentioned though: the time limit! It is so short that in most cases, you'll not lose because of points, but because of elapsed time. Especially in later levels, each serice tends to take very long because both teams are very good at defense. Sometimes, I even found myself dropping the ball on purpose - just to 'get a fresh chance'!
Fortunately, the crackers of this disk image (I have the original version on the Amiga) have included a trainer to turn off this time limit. And the game is quite a lot more fun without it! No need to theorize about what could have been - here's the proof, try it out yourself!

The rating and final verdict is based on the game as it was originally sold of course. And Beach Volley is a very good game! Pure fun, good graphics, excellent music! Only sometimes frustrating for the mentioned reasons. But it's worth standing this one disadvantage - it's all for your health after all 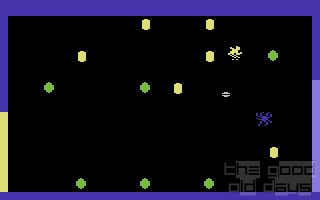