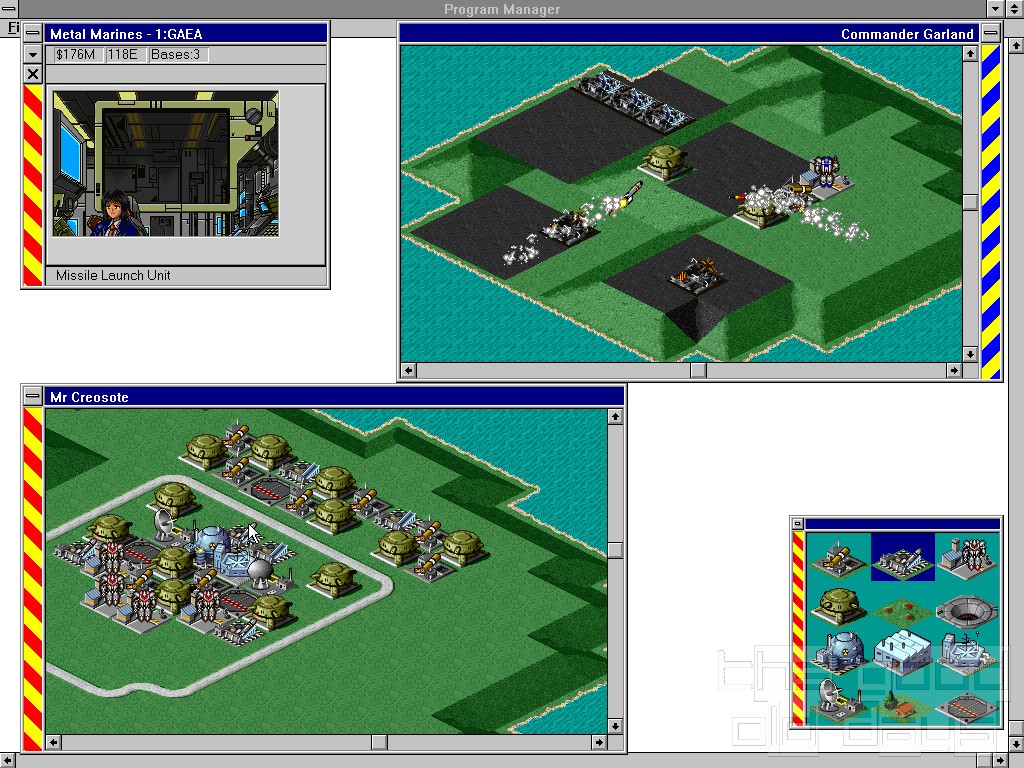 A real-time tactical wargame? Not exactly what one would expect on a game console, with a digital gamepad as only input device. Nevertheless, Metal Marines proved to be interesting enough to receive a port to the IBM PC platform where the developers took some interesting decisions when adapting it, so that it becomes almost a different game.

Framed by an irrelevant plot about bad warlords struggling for supremacy over the last habitable bits of Earth after a large-scale nuclear war, the game pits two generals against each other in each level. Both of them located on their own small island, the goal is to destroy the opponent's headquarters (can be several) before losing one's own. Attacks can be launched either with missiles or the eponymous Metal Marines, giant battle robots (what else, it's a Japanese game…). Defenses can be marshalled using appropriate stationary countermeasures.

Building, attacking and defending all happens in real time. Launchers ready to fire? If you happen to be occupied placing a new bunker, bad luck – valuable seconds lost may mean the end in this game. This goes almost as far as placing it borderline into the action genre.

Tactial considerations are primarily relevant in building and installation placement. The island structure being given per level, rugged terrain puts lots of constraints on the possiblities to build. From which direction will enemy missiles approach? Better place some batteries there to intercept them before they do any harm. Is it smarter to heavily defend just one headquarter or all of them equally, at the risk of being spread thin? Is it better to have a large number of missile launchers or few, but upgraded to maximum strength?

The actual fighting is as simple as it gets. Once the target for a missile is selected, what remains is hoping for the best. Send a Metal Marine off and watch it destroy things (or be destroyed). As construction, recharging of resources is only subject to time. Meaning missiles simply re-appear on their launchers after a cooldown period, money trickles in constantly to repair defenses, just like energy… some of these rates can be influenced by constructing special buildings, which, however, have to be defended as well, then.

What makes it rather fun is the gimmicky way of handling and presenting those battles. Using the Windows 3.x interface, each island is shown in its own window, plus one for communication, one for building etc. How do you launch a missile or select a target for your robot to attack? You drag and drop it from your own island to the other one. Whoosh, off it goes, flying across the window borders, but nevertheless respecting the laws of physics in its flight curve (i.e. it can still be shot down by defense batteries not in view). The higher screen resolution, the larger the benefit in objective terms, though what's probably more important is the rather cool feeling this creates.

Two-player mode, via serial link, turns into a huge amount of fun if both players have a roughly similar experience level. Playing against the computer, it's also quite entertaining, although levels turn very hard quickly. Not only is the learning curve steep, but the computer players apparently have resources at their disposal which are hard to catch up with, and even start on superior geography. One issue occurs regardless of single or multiplayer mode: interface reactivity suffers when too many things are going on.

This can be partially mitigated by reducing the detail level of animations, but it always remains noticeable in obstructive ways. Almost even more importantly, this takes away from the entertainment factor considerably. Missiles flying in the most “plain” way, causing no big explosions, buildings just appearing instead of tiny construction going on… it gets sort of dull much more quickly. The pure tactical game, boiled down to its core mechanics, is sort of alright, but honestly not much more. Metal Marines draws its main appeal from watching those little toy armies shred each other to pieces. It's a style-over-substance game which I wouldn't want to miss.

Windows 3.1 has never been a gaming platform. It was simply too slow and unstable. There were of course exceptions. Most of them were turn-based games requiring much thinking. And there was Win-Doom as an action game. But that's it. Almost. One game which showed one possible way to work with Windows is almost always forgotten: Metal Marines.

Most Windows-games tried and still try to cover the OS their running in. Mindscape chose a different way and even proudly used many Windows-driven options. That becomes clear at once when looking at the game because it runs in a window. Not only in one, but in several windows. Each contains something different. In the two main windows, a landscape can be seen. These are the islands the battle takes place. Each player owns one island/window. Here he can build structures like a HQ or a radar station, offensive weapons (missiles, Metal Marines) and defensive ones (Anti-Air Missiles, Bunkers, Metal Marines again). But the enemy only sees the landscape, as long as he doesn't scout it, he can't see the other's buildings.

The goal is now to defend you own command centers (you have three of them) while destroying the enemy's. To build weapons you need money which flows in all the time. Still you'll never have enough of it. When you've built a missile launcher for example, you simply use drag & drop to attack the enemy's island. Then the missile will fly over the window's border into the other window and (hopefully) explode on the ground. If you're not so lucky, it will be shot in the air by defensive missiles. Using Metal Marines works similar, only that they are ground units.

Against each possible attack, there's a defense. It's not overly complex, but that would only hurt the game anyway. Even though it's very simple (just ground/air attacks), you still have to plan a thought-out defense to withstand the enemy.

For single players, there's a campaign with slowly rising difficulty level. But it's much more fun to link two computers and battle another human. Only then the emotions will get really high...

Sphacelate (2007-06-27):
Unfortunately, this game is modem an serial connection only for multiplayer.
[Reply] 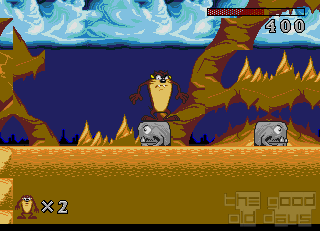