The Lost Files of Sherlock Holmes
for PC (DOS) 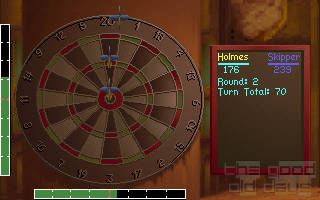 A young actress has been brutally murdered right behind the theatre. It looks like Jack the Ripper has found his first victim outside Whitechapel: the poor woman's throat has been cut and there are more wounds which could only have been inflicted with a scalpel all over the body. Inspector Lestrade from Scotland Yard is leading the investigation - and he asks the world's first, most famous and only consulting detective for help: Sherlock Holmes.

The game starts out very promising. Mixing the probably most famous 'villain' of the Victorian era with one of its most famous 'heros' works in spite of the glitch (which the game mentions) that Sherlock Holmes actually never deals with maniacs. The intro even shows Holmes without a pipe in his mouth and without that coat everyone seems to relate to him.

The latter unfortunately disappears as soon as the actual game starts. For the rest of the time, you have to stand the protagonist wearing this dreaded thing which according to Sir Arthur Conan Doyle he would only do when travelling outside the city. The TV virus has struck again (at least Holmes isn't constantly puffing his pipe...)!

Fortunately, there are other nice details which more than make up for this. The huge “VR” on the wall of 221b Baker Street as mentioned in The Musgrave Ritual just being one of them. Fans will also meet known characters and discover more little things they might have read about before.

To get back to the actual game, the first scene (the scene of crime) is actually very promising concerning the gameplay, too. In very 'Holmesian' style, you have to search for little clues like a cigar stump - and have pleasant conversations with Watson and Lestrade about your deductions.

Even though most scenes are really good seen for themselves, the game can't live up to that beginning on the whole in the end. In a very untypical fashion, Holmes (and thus the player) just seems to stumble from one scene into the next passively. He never actually seems to be coming to conclusions first and then to take appropriate action. The puzzles match this quality: ask everyone about everything - lying or simply refusing to tell everything you know (even if it's something bad for yourself) seems to be a very rare characteristic in this game.

Sherlock Holmes' big ego would certainly have liked to be involved in the story of a crime of such big impact. I doubt his would intellect really be tingled though. If you enjoy classic detective stories or if you're just a sucker for Victorian era style like me, you'll certainly enjoy this game with its pretty graphics of old London. On the other hand, it still could have been a lot better of course...

Mood. Every human creation that is meant to communicate has it. Although it is mostly subjective, I believe that the mood that one perceives in certain work, or message, has a lot to do with the final opinion that we are going to have about it. With that said, in a not very practical way of honesty, you'll know exactly what is the base of the review that follows.

I think this game was the very thing that started my interest in the man with the hat and the pipe. And even if it's not canonical in some ways, it's obvious that there is a lot of attention to details and circumstances that come right from the books: someone in the design department of EA was a Holmesian, I'm sure. As soon as the opening cutscene ended, and I was presented with the living room at 221B, I was completely immersed in that world. Why? Because of the MOOD.

There is an impending sense of tragedy that floats in the air from the beginning to the end, even if the ultimate outcome is not as tragic as it seemed. Also, a feeling of nostalgic (and therefore epic) acceptance to the things that are in motion, and that perhaps cannot be stopped. And the credit for all this, as usual, has to go the music.

You'll find here some of the most beautiful music that has ever graced a computer game. The delightful melodic work will make you forget that you are listening to MIDI, and make you wish a chamber orchestra played it some day in a concert. The melancholic, almost classical, main theme is played with different moods throughout the game: with a violin at Holmes' apartment, which is his instrument of choice; in a more staccato manner in the street, and agitatedly in the action sequences. Every location and event has a particular theme, à la iMUSE, trying to create a cinematographic sensation, which was the common, and personally welcomed, place in most graphic adventures in the first nineties.

The graphics are neat, but the animation could have been a little better. They're peculiar because of two things: the lighting is fantastic, as the designers did a splendid job in reconstructing the setting of Victorian London in terms of light, and also the backgrounds and objects tend to be kind of pearly because of the way the color palette is handled, which makes you feel there is fog everywhere you go, even in interiors. I don't know if this was intentional, but some people will like it, and other won't.

Just because of the visual and sound experience, I would recommend The Lost Files of Sherlock Holmes. I liked the story, setting, and dialogues, but I played a translated version so I must see how the original lines were. I'm obviously biased as I'm particularly fond of this game, for being one of my first graphic adventures and my first entry in the Holmesian universe. Do know that there is a CD-ROM version of the game (which I think was for 3DO) that incorporates little live-action frames with actors in the dialogue sequences? I have yet to play it, so I can't give an opinion on the quality of the acting. 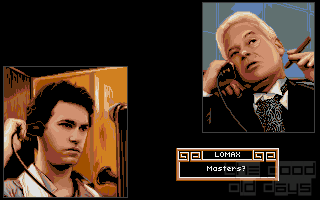