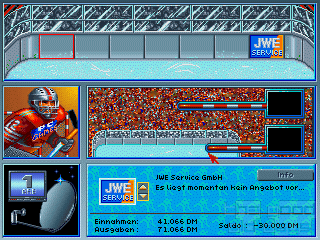 Although Eishockey Manager is a game in its own it should be considered more a sideproduct of the successful Manager series by Software 2000. If you know Bundesliga Manager Professional then you'll be comfortable with this game at once because the menus are basically the same.

At the start you can choose from several options: number of players (1-4), how long the game should last (timed or indefinite), the degree of difficulty, where to start (from 1st to 3rd division) and how strong the team should be at the start. You can also select whether you want to include the German Cup and the World Championships.

If you chose to play the German Cup then the game starts with the draw of the matchups. As there is no counterpart in real German icehockey the programmers just transferred the Cup system from Bundesliga Manager - cheap shot I'd say. The World Championships however, which take place at the end of the regular season, are a nice feature. As the national coach you choose the best players of all divisions, let them play in friendlies to get them together and then the real thing starts.

You control every aspect of your team - from finances to team management to youth teams to stadium improvements... Teamwise you can determine the line-ups, renew contracts, send scouts to find free talents, have a look at the transfer market and define some tactics. An important aspect is the training schedule. For each day of the week you can set up to four different routines (skating, shooting, endurance...) which - set up properly - can greatly improve the team's performance. But if you're overdoing it your players will falter from exhaustion...

To get some money you can find some potent sponsors or loan money from the bank. Die-hard gamblers can try to make a fortune on the stock market. A worthy investion is supporting the 3 youth teams. Their respective strength is shown by a hypthetical placing quite similar to the actual divisions. High sums will eventually result in crack youngsters for your team but it takes quite some years to get profitable.

So why not spending some bucks into stadium improvements like adding a few thousand seats, improving the overall quality of the arena... Adding peripheral buildings like restaurants or a bowling hall will generate more spectators and additional income.

The match itself can be followed merely by watching the stats or by looking at little action sequences of important scenes. They are quite nicely made and fun to watch but after some time they get repetitive. The extensive statistics are also mentionable showing winning and losing streaks, highest wins and biggest losses, highest attendance etc.

If you know the Manager series and like it you can't do wrong trying this one. But on the other hand there's nothing really new... What makes this game remarkable is the fact that only a few games give you the opportunity to manage an icehockey team. Overall a solid though by no means revolutionary sports manager simulation. 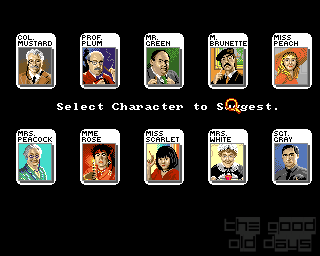