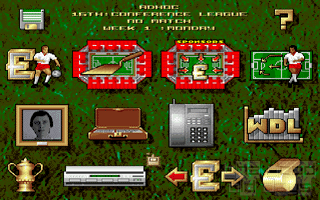 Premier Manager III concludes the original trilogy of football management games by Gremlin, and pretty much ends the golden age of sport business management games. While it lacks in player statistics, it makes it up by including a very complex business model and match management. Neither the later Premier Manager titles by Gremlin and Electronic Arts, nor its successor, the Total Club Manager series by EA, come anywhere close to the perfect blend of engaging gameplay and deep and complex strategy that PM3 offered.

In PM3, you take over as a manager of one of the 22 Conference League football clubs in Britain. You will be responsible for managing your squad, assigning tactics, training and injury recovery, and for the club finances. There is no real set goal in this game; you can go on to win the UEFA Cup if you want, or you can simply work in the Conference League, trying to advance one team after another into the Division 3 League (my favorite pastime). To understand the game better, I divided the review into three categories: business management, player management and match management.

While games like Championship Manager were heavy on realistic statistics, they greatly lacked in business management. I never really understood how I could acquire or sell players there, given that I didn't know where the money was coming from. PM3 doesn't have that problem: you will be the master over your finances (that is, as long as the directors don't waste everything on charity). In order to successfully run the club, you'll need to sign with advertisers and collect ticket receipts. Both require that you improve your stadium over time, which costs money. Advancing in your league doesn't hurt, either.

Player management is the weakest part of the game, but I like it that way. Players are reduced to a set statistics, and when it comes down to it, these statistics are then condensed to a single number, which ultimately determines the strength of your team. You'll be able to acquire players, sell them, look for young prospects, as well as train them. The management includes several levels of insurance for each player and payroll negotiations.

Match management is the total opposite of player management. While it looks simple, it can surprise you with its depth and complexity. You can assign a very detailed tactical plan to each of your players, depending on their position on the field (the field is divided into twelve zones for that purpose). You'll be able to save up to 64 different tactics, and you'll soon find out that these are not sufficient for the number of various combinations, depending on which team you are facing. Once in the match, you'll be able to follow it, which will give you an idea on how each player is doing and whether you need to adjust the strategy a little. This is a great improvement over Premier Manager II, where you had only a text commentary from a match.

What makes this game so memorable is the particular mix of all three factors. They are very easy to learn but hard to master; every time you think you mastered them you find another, deeper layer of strategy that you can employ. In addition, the game has solved several problems that plagued its predecessors. It's the first game of the series that doesn't crash after a couple of seasons due to insufficient memory problems. Its match screen finally allows you to follow what's going on and fine-tune your strategy. It allows for a slightly more realistic gameplay: instead of winning the FA Cup in the first season, as I routinely did with PM2, you'll have a hard time to even advance from the Conference League.

There are very few downsides to the game. Probably the biggest problem I've had was that the game had a CD check, which forced me to run it in pure DOS. In addition, the player management was a little unrealistic. While I appreciated the simplistic statistics, which allowed me to concentrate more on the gameplay, I felt that the training was a little too powerful. Within a season, a player could improve by several levels, so simply keeping to the same squad and occasionally trading away older players in favor of younger ones assured that within a couple of seasons I had the best team in any given league, just based on training. For some reason, the A.I. never seemed to train its payers.

Despite these shortcomings, Premier Manager III is a very fine piece of workmanship. It is one of the reasons why I still keep a DOS computer around. Having played many other football management games, including Total Club Manager 2003, I somehow seem to gravitate back to Premier Manager III.

The third part of this series is very much similar to the second part so I just want to point out the major differences. For a more thorough description of the game concept itself have a look at the review of Premier Manager 2 on this site.

- the graphics have been slightly improved

- you're managing your personnel now via the suitcase, not the phone

- the matches are animated, but this look so crappy for 1995 you don't really want to watch this

- you can employ an assistant manager who – depending on his quality – can take over duties for you such like determining training schedules, find the best treatment for injured players, looking for sponsors…

Unfortunately all negative aspects mentioned in the review of Premier Manager 2 apply for this part as well, but again it's a solid football manager with lots of different options.

Amph:
I thought this was one of the best sims around in 1995. I played it even more than simcity. 2 thumbs up!
Adhoc:
Feel free to share anything about Premier Manager 3 (1995) here!
[Reply] 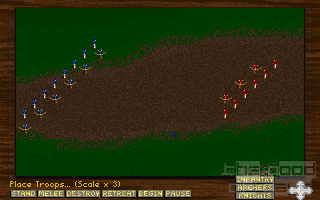