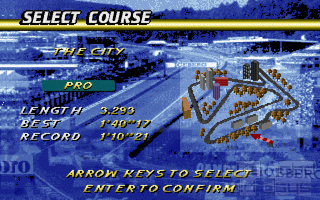 From the starting menu you can choose whether you want to run a full championship, just a single race or practice a little bit. Here you can also select you race car (Formula 1 or Stock Car) and if you want a certain number of laps or a race against the clock.

With each car model you have 6 different types to choose from. Their difference lies in maximum speed and manual/automatic shifting. Whereas the F1 cars are easy to handle the Stock Cars slide around like they were driving on ice. It¨s really hard to get a decent drive with them.

The 8 tracks available are rated in 3 levels: Amateur, beginner and pro which reflects their difficulty. But the laps are quite short (12-80 seconds) so the races themselves are quickly over as well. On these partly very short tracks a total of 20 contenders are going for first place which means a lot of traffic on the asphalt. But luckily your car cannot be damaged so you can just push the others out of the way if you have to do so.

In the Championship you are racing all 8 tracks in their respective order. You get points based on your position but unfortunately you never see a ranking so you just can guess where you would be in the standings. But on the other hand the AI controlled racers are so slow that I won the Championship on my very first try with the slowest car and without knowing the majority of the tracks. The others are just ridiculously slow. And as there obviously is no option to influence the opponent's level this is a major weak point of this game.

The situation is very much different if you select the Stock Cars. As mentioned they slide around like hell. You have to steer very carefully to get through the corners at a reasonable speed which requires some practicing.

The race can be watched from several cam positions: two outside cams, one inside cam and a tracking cam (virtually useless as you're not able to see the next corner). As your car is invulnerable you can bounce off other cars and the walls as you wish, a nice option to get around sharp corners.

Although there are a lot of things who could make this a good game (best lap/race-time lists, ...) it is hardly mediocre: Weak AI, just 8 short tracks, horrible sound (though the grafics are OK). Maybe the game is more fun in the multiplayer mode (via hotseat or modem)... If you're desperately looking for an arcade racer have a look. Otherwise...well, at least I warned you 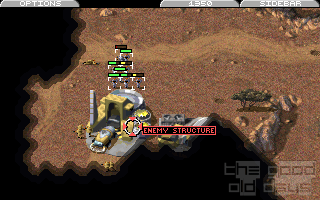