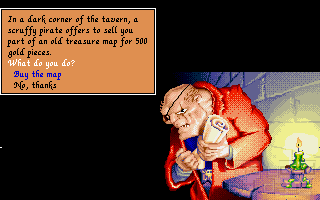 First of all, all comparisons are referring to the original Pirates! and the PC version of Pirates! Gold. Read the first review for a detailed covering of the gameplay itself. It is almost identical in this version.

Microprose had already left the Amiga market before, but with the 'new' models A1200 and CD32, they reconsidered. Pirates! Gold was one of the very first CD32 games which was not just a 1:1 conversion of an existing Amiga game. And it was one of the very first ones to actually use the capabilities of the medium 'CD': the sound was vastly improved and the CD has a lot of music.

The game itself (i.e. without the music) is approximately as large as the PC version: 15 MB. So should we expect similar graphics? No, not at all!

Microprose made everything from scratch again, the graphics are neither based on the original Pirates! nor on the PC version of Pirates! Gold. Instead of the high-res aquarell pictures of the PC, this Amiga version features a lower screen resolution and lollipop colours. Some still pictures actually look very good (your character in prison for example), on the whole, it has a bit of a childish style to it though. Sure, objectively spoken, it's just 'different', but I really prefer the PC version here.

A really nice improvement is the city menu. On the PC, you just click on the buildings you want to visit. In this version, you see your character from third-person perspective and you actually walk around in the tiny 'menu' in Adventure style. Nice idea.

The last notable point for comparison is the controls. The CD32 only had this really crappy gamepad, so in emulation, it's controlled by the virtual joystick. The turning of the ship gets a bit tardy because of that. It's all not as exact as with the mouse.

On the whole, historically a very interesting version, but for actual playing, I'd prefer the PC version. Not that this is a bad game - it's still of masterpiece of course, some pink can't kill mighty Pirates!