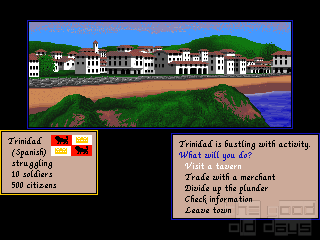 Every time Sid Meier has a wild card to really do exactly what he wanted, he came back to Johann Sebastian Bach. In the early/mid 1990s, after the massive, consecutive hits Railroad Tycoon and Civilization, he turned his appreciation for this composer into an ultra-obscure music application on the ultra-obscure 3DO console (CPU Bach). Some years earlier, in the mid-80s, he had already built a strong name for himself with military simulations and wargames. Microprose's overall business relying strongly on Meier, he played his first joker and – in a daring departure from his established genres – made Pirates!. 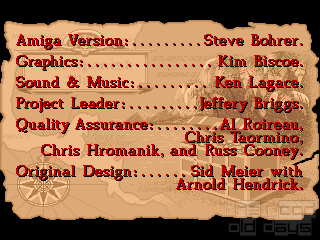 Even by Microprose standards, the Amiga port took exceedingly long, but after desperately waiting three years, this by then already legendary game hit the prosperous shores of the then most powerful home computer, and the Bach tunes accompanying the game never sounded better. And what was probably even more rewarding to Amiga users was the complete overhaul of the graphics; especially since the nemesis, the Atari ST, had received just a fairly lacklustre conversion just the year before, graphically still much too close to the original C64.

Music and graphics aside, Pirates! showed a far departure from what Microprose customers were used to from Meier (or any of their other designers). Escaping traditional genre boundaries, it is probably closest to the Cinemaware approach (Meier's visit at the Cinemaware booth of a trade show just before is well documented): instead of starting design from a core gameplay mechanic, the game is designed around a theme. In this case, obviously, the romanticism of Hollywood style piracy. 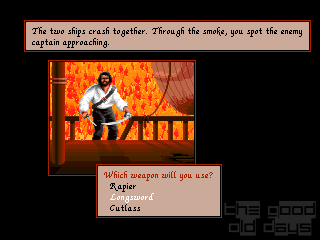 Hand me the sharpest one!

Though where said Cinemaware usually launched their minigames based on an overall tightly written plot, Pirates! pioneered a different approach of open-ended gameplay used for emerging storytelling. So it is actually Elite, just on the seas? Again, to a degree, as sea battles, storming fortresses etc. shape the overall feeling, just like the encounters and discoveries did in the older game. Though where there, really all was happening in the player's imagination, Meier did hide little snippets of actual plot here and there. Little plot threads which can be followed or not, this being totally left to the player.

Pirates! therefore occupies a noteworthy middle ground, hitting a sweet spot between guiding player experience, but nevertheless keeping it sufficiently open to allow for strong replayability due to variety. Whether you take your initial small ship looting and pillaging right away or whether you go for boarding other ships first to enlarge your own fleet or even do a little bit of peaceful trading first is left entirely up to you. 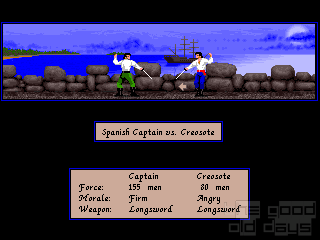 Even after initial build-up, what kind of pirate do you want to be? Commanding daring attacks against heavily guarded fortresses? Using a network of informers to spy out movements of the Spanish gold and silver transports to ambush them? Hunt for buried treasure in wilderness? Try to reunite the scattered family members (also, obviously, to get rich in the process)? If all this gradually falls into the “old hats” category, go play as a Spaniard in an age when essentially the complete Caribbean is Spanish, i.e. opportunities to plunder are somewhat… limited.

The mini games triggered fall into the simple and also rather easy to master bucket. Good fencing skills certainly make a difference, even making triumph possible when overall vastly outnumbered (ever had 300 armed men surrendering to you, standing alone?). Ship battles are straightforward, considering presence of cannons on board and the winds. Attacking fortresses from the sea side is probably the trickiest of the bunch, though luckily, approaching from the land side is also possible. In the latter case, the artificial intelligence controlling the defending army is (fortunately and unfortunately) overall unable to cope. Last, and in this case least, there is the sun sighting to determine current ship position on the open sea, which proved rather useless in the big picture and was even removed in subsequent versions. 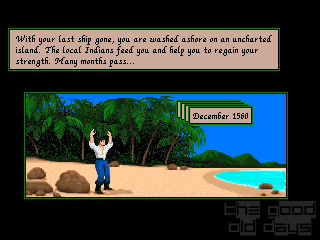 Meaning Meier's intent with these mini games clearly was not to challenge too much, but rather for the player to take in the setting and live their own adventure. Even on failure, when imprisoned or one's own ship sunk, the game actually goes on. Such interludes simply become part of said adventure and its narrative. Unless optimization obsessed players restore their previously saved state, that is. Though unlike Wing Commander, which attempted and failed at incorporating failure into the player's personal narrative due to its strictly discrete mission structure which implicitly suggested the restoring route after failure, progress in Pirates! is much more fluid and continuous. Restoring a saved game almost always also means deleting a couple of nice to great experiences had in the meantime, so players have to think twice before doing this.

Finally, what further increases the lure to go on repeated adventuring is the underlying simulation of the changeable world. Although on overall simple terms, there are things happening regardless of player activity and performance. Wars are being declared, cities conquered, other pirates are attacking… Nation and city alignment therefore changes towards the player, their wealth goes up and down etc. If one thing is to be criticized, it is probably that the player's influence on all of this is maybe even too strong. Experienced pirates would be quite able to turn the complete Spanish Main Dutch during their career, for example. Though considering how many trading games still using mostly static price charts were still being released for years to come following Pirates!, it's quite an achievement already. 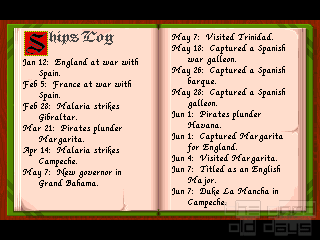 All that said, with two officially sanctioned upgrades available (Pirates! Gold from 1993 and Sid Meier's Pirates!: Live the Life from 2004), should you still play the original? Well, first of all, this game reviewed here isn't the original either. Audiovisual differences aside, on the C64, you played with the joystick, this one with the mouse. So in a way, it can actually be considered an intermediate step towards development of Gold. Minor tweaks of swordfighting and a slightly adapted map aside, that version is still the same game at heart, though. The later remake tried to infuse the game with a stronger explicit storyline (for better or worse) and new mini games (the dancing). Honestly, it is very likely a matter of subjective preference. It is quite likely at least that once everybody has found their preferred version, they will stick to this one. Jumping between the versions wouldn't make a whole lot of sense. Personally, my recommendation is either this one or Gold on the PC. They look best (the newer one, ironically, loses here due to use of badly aged three-dimensionally rendered models), handle well and leave just the right amount of player freedom. No matter what version you pick: unspeakable riches (and true love) are just waiting for you!

Arr, Jim-boy! After three years, the vicious pirates have finally found their way to the prosperous shores of the Amiga. But instead of the ageing, sea-worn face of the original, we get a completely new and streamlined version - all the wealth which has been amassed in the meantime shows!

You're put in the role of a small pirate sailing the carribean some time between 1560 and 1700. Unlike today (?), piracy wasn't strictly illegal then: each country employed swashbucklers to raid their enemies' ships and cities. So this is the situation you find yourself in: fight for the glory of your own country and fill your own pockets with gold as a nice side effect.

You start out with one single ship and only a few men. Only unprotected merchantmen will most likely be your targets. As your fame (and wealth) grows, more men are willing to join your crew, and with each ship you board, your fleet grows. Soon, even the largest cities with the best fortifications will tremble at the sound of your name. However, there are still even bigger challenges - like raiding the Spanish Treasure Fleet or the Silver Train...

Pillaging is of course not everything in the life of a pirate. As everyone who has read at least one pirate novel knows, the whole carribean was full of hidden treasures in those days. If you're just lucky enough to get hold of a map, you're in the race of digging one up. The crew doesn't care where the gold is coming from as long as it is rolling in anyway.

Pirates! is one of the very few games which can't be classified by the means of the 'classic' genres. It was unique when it made its debut on the C64 in 1987, it still was when the Amiga port came out in 1990, and it is still today. You sail around the carribean in 'real time'. Whenever you encounter another ship or sail near a town, a few multiple choice menus are presented to you. Do you want to let the ship pass or fight it? Do you want to sail into the harbour peacefully or ready the guns for battle with the fort? Or do you prefer landing somewhere on the nearby shore and attack the town from land?

Each choice either triggers another menu (the peaceful options...) or an action scene. If you attack something 'by ship', the map is 'zoomed in' and are in control of your ship again. Only this time, there is another one (or a fort) firing its cannons at you. So you're doing the same (in pure self-defense) - until you crash together. Now, man-to-man combat starts. The captains meet for an honourable fencing duel which decides about the (hopefully positive) outcome of the battle. In your own country's towns, you can sell the goods you stole, get special missions from the local governours, have your fleet repaired and a lot more.

If all that isn't enough to keep you motivated, there are a few story elements to discover as well. For example, most members of your family are for some reason lost on different islands. Other captains may know something about their exact whereabouts, but they won't disclose this information voluntarily, so you have to hunt them down first.

The Amiga version of Pirates! is definitely the ultimate one. Wonderful graphics and brilliantly sampled classical tunes await those who dare to enter this fascinating world...

Rob S.:
The graphics for the CD32 version are identical to the Sega Genesis port. Both games have more in common with the original Pirates! than with the PC/Mac "Gold" versions in terms of content. The PC version adds a few towns/cities on the southern Texas coast that were never there in the original game.
trad.a:
This game is beyond imaginetion (sp?). I have been searching abandonware sites for 4 months for the perfect game. I have found it. I hope you do too. Download ASAP.
Dude on the other side:
This Game Rocks
Adhoc:
Feel free to share anything about Pirates! (1987) here!
[Reply] 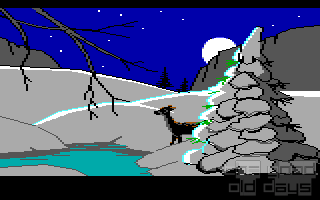