The Detective Game
for C64 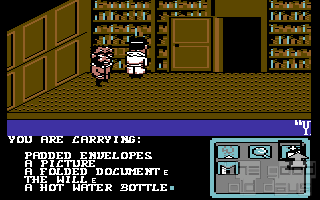 The name says it all. End of review. Ok, that would have been a little too unsatisfying. So here's the obvious: In The Detective Game, you take the role of a detective. This (very British) detective is called to the residence of millionaire Angus McFungus to investigate the murder of the owner himself. The body's still warm, and the murderer has to be amongst the people currently present. All the clues are scattered around the house, all you have to do is find them, put together the evidence and arrest the right person - and survive.

While you're trying to make sense of the whole situation, the killer continues his (or her, don't want to spoil anything) murderous deeds. One character is for example squashed by a piano. Not a very nice sight. Try to see the positive aspect: one potential suspect less.

The Detective Game uses an easy icon system as controls. Depending on the nearby items and people, different functions are available. Controlling the cursor itself by joystick can just be a little ackward at times. Other minor glitches (like the inability to 'escape' from a chosen menu without doing anything) aside, excellent controls.

The graphics are of top quality, too. All rooms are easily identifyable by their characteristic furniture and decorations. The same goes for the characters who all sport huge heads to make their distinct features more prominent.

The only real problem the game has is its shortness. Collecting all the evidence can be quite tricky, but once you got the hang of the game, it can easily be finished in one sitting. The 'plot development' of the additional murders in the course of the action were the right track already - more could have been made out of it.

This is why the rating was a tough decision. The game is somewhere between four and five points - neither is closer than the other, though. In the end, I went for the better rating for the sake of the elegant controls, the good graphics and the atmospheric music and sound effects. Feel free to disagree, but try for yourself first! 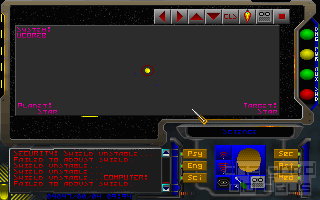