Battles of Napoleon
for PC (DOS) 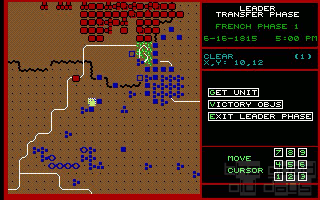 You know, some time ago (about 200 years or so...), there was a great man (I avoid saying 'big' at his 1.60m height) who liked war. Maybe a bit of a pertinent introduction, but no matter if you are French of Anglo-Saxon, you are going to enjoy this.

Well...I don't really want to discuss about politics, I'm generally pro-Napoleon and don't regard the Napoleonic wars as a disaster for Europe. But, disaster or not, it wasn't too fun to lead them. Now it is!

Battles of Napoleon consists in a series of many, many historical battles carried by Napoleon, putting you in the role of a commander. You will command the French or the Allied army in a TBS game, which is not an easy mission. So, let's see how you do that...

The first thing you'll realise is that BON is not an ordinary TBS game for people who lack the grey stuff in their brain. There are three main phases: the Objective phase, the Leader phase and the Movement phase, which is quite close to what was happening in reality. At first, you set an objective for every leader (for example, you give Soult the Pratzen Height as an objective). Then, in the Leader phase, you will establish a place for each leader (for example, place Soult in the second regiment of his corp d'armee). And, after that, you begin to rock in the Movement phase, where you order your units to move, fire, melee/charge and so on.

BON offers the best way to view a battle: square-shaped units, viewed from top-down make it easy to see what's going on in one of the two views - the Tactical view (very close) and the Strategic view (very far). You'll see how much difference this makes if you ever try to play Waterloo (a game contemporary to BON). While not impressing in terms of graphics, it's very easy to manage a battle and even make some nice moves out there.

Speaking of nice moves, you are really going to need that. BON allows you to customize a battle, but with the default options, things will be very close to reality. Very hard for the French, that is. BON is much easier when playing for the Allies (try to play the battle of Essling), but much more rewarding and interesting when playing for the French. The battles are **very** closely recreated and quite similar to the reality.

BON offers you not only strategical control, but also tactical control. You can order your units to enter a certain formation, order batteries to limber&unlimber and so on. This is something very important, as any formation has advantages and disadvantages e.g. units that form squares can easily support a cavalry charge, but are vulnerable to enemy fire.

There are, however, two things that drop down the realism of this. The first one is the fact that it's square-based (being a TBS). That means that you'll have a hard time trying to make a propper encirclement, as the enemy will always have a place to escape unless you use half of your army to encircle two regiments. Besides that, the unit organisation is quite primitive - cavalry, infantry, artilerry and that's all. You don't have Cuirassiers, Hussars, Dragoons, Grenadiers and Pikemen so the range of options is quite limited in terms of tactics. But even so, BON is a faithfull recreation of the reality, and it's deffinetly one of the best sims of Napoleonic wars, even after all this time!