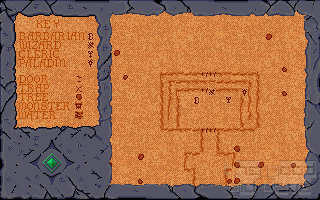 I'm not going to explain who or what 'Sorasil' is, nor am I going to bother you with what the 'legacy' the title speaks of is. You really don't need to know. Seriously - I've never heard so much boring cliché crap at once.

Let's rather get to the game itself. What we have here is a sequel of (you guessed it) Hero Quest. It's not based directly on the famous board game anymore, though the roots are still visible. In the end, it's a slightly enhanced version of the original.

You start by assembling your party. There are a few more character classes to choose from this time. Each character's stats can be enhanced a little, choosing from categories like strength and magical ability. Later in the game (after you've found some gold or other valuable items), you can also buy additional weapons and other stuff.

In the levels, each character gets ten movement points per turn (no more dice rolling). The maps are still laid out like in the board game (just that there are different maps, not just one), so you're moving from one square to the next. When you encounter monsters, you try to slaughter them. In addition, there are hidden traps which will mercilessly kill you if you don't discover and disarm them first.

All of this is pretty much the same the player is used to from the original. A few quality problems arise, though, mainly with difficulty. If you don't search for traps every few steps, they'll quickly get you. That's not fun, but just frustration.

Also, the graphics are actually worse than in the predecessor, because walls and other obstacles constantly get in the way so that you can't make out the exact location of monsters without consulting the map.

Hero Quest 2 can't really satisfy anyone. It doesn't appeal to the board game crowd who want simple challenges. Too many usability and fairness glitches. Hardcore RPG gamers also won't like it, because it's still lacking the complexity of a real RPG. If you think you're somewhere in the middle, try it out.