Murder on the Mississippi: The Adventures of Sir Charles Foxworth
for C64 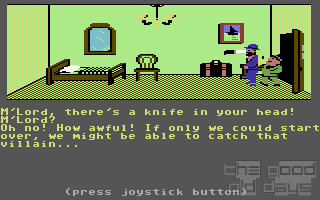 Famous detective Sir Charles Foxworth is taking a holiday on the Mississippi with his servant Regis. He's just taking a stroll around the upper deck of the ship when he discovers an open cabin door. Behind it: a dead man. As it turns out, the body of Raleigh Cartwright III. Sir Charles has three days to find the murderer, because then, the ship will reach New Orleans, giving the culprit a safe chance to escape.

Murder on the Mississippi is widely known as one of the first Adventure games which didn't use keyboard input at all. The classic interface had been replaced with simple joystick controls: moving it into a direction just causes the player's sprite to move into the respective direction, and pressing the button opens a menu with appropriate commands for the current situation.

This system still proves to be very intuitive today, allowing even younger gamers to concentrate on solving the case itself instead of fighting with the interface. This task is - compared to later Adventure games - a relatively short one, though it's of comparable length as the direct competition of the time.

The difficulty level and nature of the challenges are on par with the best: Interrogating the other passengers is necessary, but it doesn't go out of hand. Finding hard pieces of evidence is the other major aspect of the game. Here, a small oversight of the game designers comes into light: It's necessary to search locations several times, standing on exactly the right spot - sometimes to find an item which wasn't even visible graphically.

In general, graphics and sound are top notch, though. Especially the scenes on the decks are excellently drawn, and the music is serious humming-along-material. Along with the well-written, humorous dialogues, they create a very light-hearted and stylish atmosphere.

If it weren't for a few annoying death scenes, Murder on the Mississippi would have been perfect. No chance this minor downside can't spoil the whole game, though. What we have here is a deserved classic, and if you're one of the unfortunate few who still don't know who the murderer is, I must insist you start playing right away!