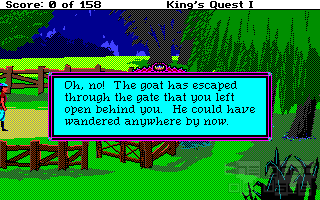 You are Sir Graham, noble knight in some medieval kingdom at the court of the old King Whatever. The king apparantely has some magical powers, because he can control when he wants to die! And he has decided to walk over the Styx once he has finally gotten his collection of stereotype king-stuff (magical mirrors, unlimited treasure chests and such) complete. Lil' King is too busy sitting on his throne gazing at the walls to find the last three missing pieces himself, so he gives the job to one of the guys who always hang around in the castle grinning and saying 'yes, my lord': Sir Graham. In return, Graham is promised to inherit the crown.

So that is what they mean with Quest for the Crown. Quest for a thousand deaths would be more fitting! In case you plan to play this game, prepare to die a few times for completely unpredictable reasons in every screen! Oh, water? It is of course inhabitated by snakemonsters who'll eat you up when you get near. That doesn't apply to the pond in the next screen of course, there, you will simply drown. A tree is always a great opportunity to climb up - and fall down again taking a wrong step. And so he died on and if he didn't learn to stay still, he is still. The End.

But wait! That can't be everything! True, it isn't. King's Quest also features horrible controls. This 1990 remake of the original 1984 game has mouse support for moving the character around. Unfortunately, you won't get him moving most of the time because he has the habit of being stuck at the tiniest objects. Ever been trapped on an open field of grass? This is your chance!

Commands are entered with Sierra's classic typing system. This works alright, the usual 'you have to move closer' when the parser has obviously already understood what you want to do can get annoying after some time though.

As a final blow to the customers, Sierra decided to give this remake especially cheap graphics with only 16 colours, and those are especially ugly ones (remember: this was released 1990)! Most sceneries look as if they've been drawn with Microsoft's old Paint program. To the game's credit, I should add that the animation of the sprites is very smooth. That makes walking quite tedious though since it is so slow!

A game should be seen in the context of its time. I don't expect a great storyline from an Adventure from 1984, simple treasure hunts were quite common then. The game is short, it doesn't have any story development, hardly any NPCs to talk to and so on - who cares? The puzzles are extremely uninspired and boring, if you can talk about a 'range' at all, it would be searching hidden objects to finding your way. Still acceptable for a mediocre game.

What's completely unforgivable are the major design flaws I was talking about at the beginning! Where's the fun if you have to restart after every second move? Alternatively, you can save every five seconds and then restore in the same frequency. After 50 times, you'll ask yourself why you're taking this all upon you. Just because people say it's a classic? Come on, why not make up your own mind instead? I know I did.