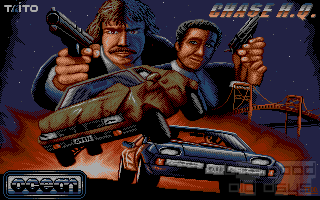 Chase H.Q., which first got into the arcades in 1988, is a racing game with a twist. Instead of just using the basic 'driving faster than the opponents', it adds another goal: catching another vehicle. The simple background story tells us something about a 'futuristic' police department called Chase H.Q.. The player sits around in his sports car all day until he gets a call from Nancy from the headquarters, telling him about an escaped criminal who has to be caught again.

This is where the action begins. Ignoring all speed limits, you're racing down the road, trying to avoid uninvolved cars (and if it's only to save precious time). Sometimes, the road forks; in such a case, the HQ's reconnaissance proves its usefulness by suggesting the way the criminal took. You are of course free to choose the other one, but catching up won't get easier if you do.

Provided your driving skills are good enough to cope with the curvy road, the obstacles on it and the traffic, you'll see the evil one's car at some point. This is where the game enters its second stage: you now have to stop him. This isn't done easily, because how do you stop a driving car without killing its driver? Right - ram it from behind until it's broken. Whatever you might think about this, it's the way to do it in this game. After trashing the car, the arrest itself is done automatically in a little cut scene. On to the next assignment.

Even though the idea to put some meaning into the 'fast driving' concept is nice, it doesn't make much of a difference in the end. What you get is pretty much the same as in the Lotus or Jaguar games - both graphically and gameplay-wise. Especially the latter reveals itself to be just the usual: shifting between two gears, a limited amount of power boosts and relatively slow controls. The graphics are mostly ok, but hardly get a sense of speed across: driving 100 looks just like flying around at 300.

For such a game, it would probably have been a good idea to have two completely different kinds of level alternating: chasing the criminal by car, and then something else to arrest him. Plenty of room in the 'arcady' genre for alternatives - and each would have lightened the gameplay up significantly. Too bad, because the mediocre driving alone just doesn't cut it.

Mr Creosote:
Agreed, it's sort of sluggish and a little jerky on the Amiga. Another case of still pictures not quite telling the whole story.
Moebius:
Paradoxical as it may seem, but this game looked better on Spectrum. No, the graphics are poorer there, at least it's greatly reduced in colour, but somehow the gameplay makes up to it and is more enjoyable than this.
[Reply] 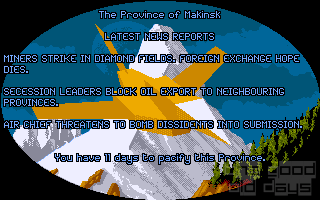