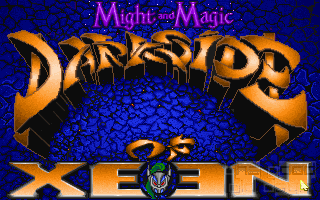 Might and Magic V: Darkside of Xeen is on the same technical level as its predecessor. So if you played said predecessor Might and Magic IV: Clouds of Xeen, it will not take you long to get accustomed to the game, because it uses exactly the same controls. If you own the previous game and install it into the same directory you get a new version with the title World of Xeen, which unlocks a couple of new quests. On top of that you can jump between the worlds with pyramid teleporters.

In Darkside of Xeen you play once again a group consisting of six heroes. Aside from the usual quests you also have to solve puzzles, for not all of your quests have an obvious solution and you might have to find the crucial clue first. The game also teaches you a thing or two. For instance how do you call words like Otto, racecar or rotator?

In this game you do not just run from a to b, but you also have to improve your characters. To do so you not only send them to training camps on a regular basis, in order to increase their combat power, but you also have to buy them better equipment, so they are better prepared for their tasks. There are also teachers for swimming, scouting etc. which open up new areas and quests or help you solve older ones. After all that stress you should not miss the opportunity to let them take a break, but beware setting up a camp on the wrong spot…

As usual in such older RPGs the game features a lot of stuff, but only very limited information. Therefor you would be well advised to take some notes of your own on a sheet of paper or a digital notepad. E.g. you can tell how good a weapon is simply by reading its name. But in order to know the exact values you will have to pay some gold – or you just use the internet.

It is a very relaxed game, due to the square structure of the world and the turn based combat, which is a welcome relief from todayâ€™s games. With the exception of some text you have to input, you can control the game by simply using the graphical user interface. As a result you can play it really well on a tablet, provided you have the right emulator. 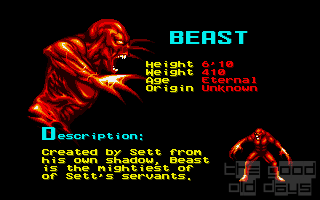