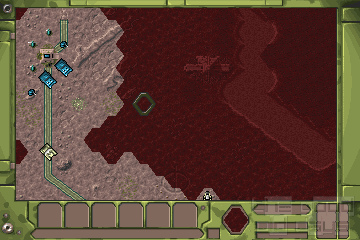 After two mission disks and the differently themed History Line: 1914-1918, Blue Byte followed their more successful game to date up with a real sequel. The evil robot armies are back and the Drullians saw no other way than to kidnap a great strategist to lead their armies - you. Stories have never been a strong point in strategy games (that made it even more surprising that a 'novelization' of the story actually came with the game). 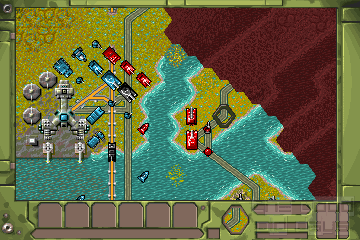 There have been significant changes to the game engine which all point towards giving single player mode more weight - at the expense of two player mode, of course. Move and attack modes have been scrapped completely for a simple all-in-one turn. Units are moved and then, if an enemy is in their reach after that, they can attack immediately. Once you're finished, the next player takes over and does the same. No more simultanous playing, but also full view over the whole screen.

These structural changes may be disputable, but they're certainly not to be condemned totally. Beneath that, there's still the solid basis everybody already knows from the first part. What's even more important now is the different types of units with their different abilities. Many units now have more than one weapon, some of which are better for example against tanks, others are ranged and others can be used against planes. 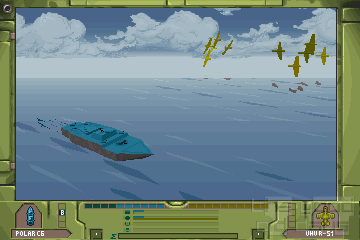 Of course, ammunition for each is limited and it can be restocked either with mobile transporters or in stationary depots or factories. It's the same for repairing broken units. All of this at the expense of resources which can alternatively also be used to produce even more units. That works only in factories, of course.

The new mouse-driven controls work quite well. Not that the joystick / keyboard controls of the predecessor were bad, but this is certainly a more modern version and more intuitive to newcomers. Another nice touch is that numerous options can now be set for each mission, allowing the player to take over each fraction - including seemingly small, unimportant ones which turns out to be incredible fun.

No review of this game without the animated battle scenes being mentioned: Fights between two units are shown in 3D vector graphics which aren't all that impressive and they also weren't when the game was new. You'll turn them off halfway into the first mission.

Although it is a bit sad that the great two-player mode was dropped in favour of a more classic 'hotseat' approach, Battle Isle 2 is undoubtedly a worthy successor to the classic first part. Blue Byte successfully (but carefully) brought the series to a new generation of players who were used to different user interfaces and presentation already. Quite impressive on its own right!