Another World
for PC (DOS) 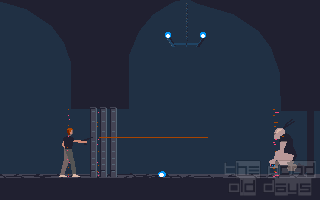 One of the most innovative games in any genre, Out of This World (a.k.a. Another World in Europe) is Eric Chahi's breakthrough game that masterfully combines action, adventure, and artistic cinematography in ways the PC gaming world has never seen.

You will sense that Out of This World is something special right from the start, even before the game proper begins. The introductory sequence reveals that you are Lester, a young physics professor who suddenly finds himself in a strange alien world after a lightning bolt struck the gigantic particle accelerator he was experimenting with. This sequence has one of the best use of camera angles I have ever seen in games: you will see various cinematographic touches (e.g. Lester walking toward the camera, which then zooms to his back) that are common to movies but rarely seen on the computer.

The game's style and technology are worth mentioning, before I get to the gameplay. Instead of bitmapped or digitized graphics that was all the rage in the early 1990s, designer Eric Chahi instead opted for primitive-looking polygonal graphics to represent the characters... and what an excellent move it was. Polygonal graphics allow for very smooth, realistic character animations that would be impossible to do with digitized graphics (and remember: this was before the age of 3D accelerators). Even die-hard fans of Prince of Persia will admit that Lester moves much more smoothly and realistically than their favorite Arabian prince.

As for the game itself, Out of This World is ostentatiously a platform game, but turns out to be a lot more. The controls are very easy to learn: only the cursor keys and spacebar are used. Although much of the game involves killing menacing aliens, whether by kicking or shooting once you find a gun, what sets Out of This World apart from other action games is that wit and astute observation are also equally important. Simple trigger-happy behavior won't help you pass the alien species of saber-tooth tiger, nor will it help you escape from prison. In later levels, you will also need help from an alien friend, fellow inmate who escaped with you. Since you cannot control his actions but can only observe what he does, planning and timing are critical.

In every respect, Out of This World is a masterpiece. The only gripe I have is that you can only save at predetermined points throughout the game, similar to console games. Since the later stages are very difficult and save points are few and far between, this means you will have to replay them over and over until you get it right. Regardless, this is one game you will want to persevere to see the ending. I spent countless hours with the game, gritting my teeth all the way through, but I was sorry to see it end. Also, as a side note, the ending music theme is among the best music I have ever heard in any game, although the ending sequence is disappointingly short. Overall, a classic game that defies the action genre - so much so that I insist on calling it an “adventure” game. With excellent plot, atmosphere, and ingenious survival-for-the-fittest physical puzzles that fit perfectly with the game world, Out of This World is an action adventure the likes of which none has ever seen. An absolute must-have, and a much superior game to spiritual sequels Flashback and Fade to Black. If you want to play a true sequel, check out Heart of the Alien that was released exclusively for the SEGA CD system.

An energy experiment has gone wrong and a scientist now finds himself in another world, an unknown and dangerous place where he quickly ends as a captive of an advanced alien culture. With the help of an alien captive now he must find the way out to freedom.

As you play the game you feel as part of a living world. The mood is well done, and there is something continuously happening. From the beginning an alien will be along you playing an active role. You will be as much helped by him as you will help him each time your paths collide in your search for a way to escape from the city.

An alive city where the guards won't always wait to be surprised. More than once they will ambush or hunt you down, and many times will you find yourself in a dangerous gunfight. For these cases you are carrying a stolen gun with three different shots, a normal disintegrating one, a energy wall for protection and, when charged to the maximum, a powerful shot that destroys whatever it touches.

Those gunfights are an important part of the game, but you will also have to run, jump and make your way around obstacle. Sometimes you will need to pay attention and not just shoot, and also you will need reflexes.

The game is basically divided in scenes. In each of them there is only one solution. But by how the game works, by how those scenes are made and joined, and by how the actions and reactions are coordinated is how the game acquires life.

For example, there is the tank one, where you must quickly learn to use the control panel, which ends in aleatory button pressings and the weapons starting to work, giving you a little more time. Also the one where you should flee while the beasts you have just set free spread the chaos around the place. Or when you have to flee from the heavy gunfire that is being sent towards you, until you can't flee anymore.

NullVoid (2017-11-04):
The funny thing is that the game's stylistic choice of using polygonal graphics made it easy to upscale for the 25th anniversary release which can be found at GOG.com.
Herr M. (2014-07-21):
Agreed! The game is unforgiving right from the beginning, were you drown instantly. But it is a nice touch that you do so because the transition from the intro to the actual gameplay is so seemless. I guess I never could have beaten it without save states from an emulator. And even then it wasn't actually easy.
Moebius (2014-07-20):
Other than being a little too difficult this game was great. Unusual, and clever graphical approach.
Wandrell (2008-12-30):
I must say this is a thing I usually forget, but this game has a second part, "Heart of the alien", where you play as the alien after they fleed from the city. But they made it only for SegaCD, the Megadrive CD add-on. Other games where ported to computer, like Cadillacs & Dinosaurs which I have around, but for some weird reason they didn't do the same for a cult game's second part.
[Reply]