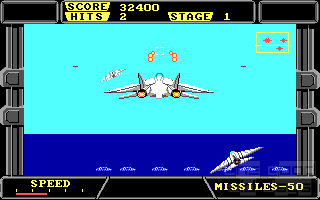 A conversion of an immensely popular arcade game, Afterburner does everything in its power to deliver the same feeling, but fall short. A long time ago, when I still visited arcade halls, Afterburner was one of my favorite games, but also one of the hardest to play, due to the long line of people waiting for their turn. It was one of those games where you sat down into a seat, which moved with you as you turned the airplane, flew up or down. The soundtrack, a cheap copy of the Top Gun music, blasted from all sides.

As in the original version, here you play a pilot of a F-14 Tomcat, blasting your way through countless enemies. The game supports a joystick, which makes it manageable, as the keyboard doesn't have an intuitive layout. You will see your plane straight in front of you, will have limited turning capabilities, and enough ammo to blast everything in your way. The levels, however, are straight-forward, always throwing a number of enemies against you. As you progress in the game, you will fight over land, sea, at night and, in one of the more original levels, in a canyon country, dodging and shooting down stationary guns.

While the game interface is far worse than that found in the arcade version of the game, the graphics live up to the expectations. Created by two experienced graphic artists, Gerard DeSouza and Faye Hoffman, who worked on the graphics for Wings of Fury before this game, the graphics are incredible, considering the very low hardware requirements of the game. They certainly add to the action-filled, linear, yet never boring gameplay, which will force you play for hours to no end. 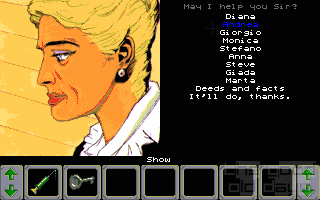