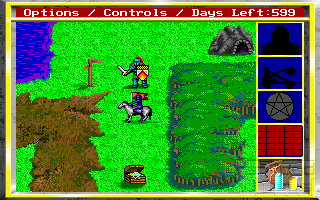 Until this day, King's Bounty remains one of my favorite games. Offering rather limited gameplay but enormous replay value, the game has never left my hard drive, ever since I have gotten it in the 1980s. In King's Bounty, you play a hero with the task to find the stolen Scepter of Order. A band of criminals has hidden this item and divided the map pointing to its location among them. Only by defeating all the criminals, you will be able to piece together the map and find the scepter, hopefully before it is too late and the kingdom disintegrates.

King's Bounty is a combination of a roleplaying and fantasy game. According to Vincent DeQuetro, who was responsible for graphics, the game was inspired by Ogre. However, the tactical screen is strongly reminiscent of Chaos, an old Spectrum game. Be it as it is, King's Bounty has offered some really unique experience when it first came out.

The game mechanics are very easy to learn. At the beginning, you select one of four heroes. The Knight is a relatively balanced hero, with extra defensive rating. The Paladin has higher morale, the Sorceress is able to cast spells and the Barbarian earns more income than anybody else. After selecting your hero, you proceed to selecting the game difficulty, measured by the number of days you will have available for finding the lost scepter. After that, the game begins. The strategic screen is divided into four continents. The view is top-down, and the action is divided into simultaneous turns (whenever you move, all creatures on the map move). You will have a small army with you, which you will have to improve by buying units either from the main castle or from various creature dwellings you will find along the way.

The two statistics you will need to watch is your leadership and gold. Unlike the Heroes of Might and Magic series, which was inspired by King's Bounty, you not only pay for purchasing units, but also pay for their upkeep. If you have too many units and not enough income, you will loose entire armies when it is time to pay them and you are out of money. Leadership is a determinant of how many units you can have in a stack. Each unit requires a certain amount of leadership points, and you will be able to hire units only until you run out of these points. The leadership points can be either improved by promotion (after you advance far enough in the story) or by finding treasure chests and opting for increasing your leadership points instead of taking the money. Money, on the other hand, can be earned either by capturing the criminals or by holding castles, each of which produces a small but steady income.

The bulk of the game will be hunting down the criminals. To do so, you will need to visit a town and obtain a warrant for a criminal. With this warrant, you can lay siege on his castle and fight him. Battles are executed on a tactical display, in turn-based mode. Creature stacks engage each other either in hand-to-hand or ranged combat, some creatures even having their own spells. It is not only important to win, but also to have as many troops remaining as possible, as creature dwellings take a long time to refill. During the combat, you will be able to use spells as well, either to aid your units or harm the enemy. When you win, the castle belongs to you and you get the bounty for capturing the criminal, as well as a piece of his map.

Graphical and sound-wise, the game was around average. The graphics offered very little in terms of animation, but were good enough to add a certain level to authenticity to the game. This was apparent especially when visiting creature dwellings. There were several kinds of dwellings, each with its own, very appropriate background. Gameplay-wise, the game was perfect. The balance between leadership and income has yet to be surpassed, the increasing strength of the opponents offered enough challenge to the player, and the fact that you could beat the game without assembling the full map gave you the choice to win before getting too frustrated. Maybe the only gripe I have is the less than stellar intelligence of the opponents. The wandering stacks ignored your undefended castles, and during tactical combat, your opponents used to block each other.

The game was so addictive that 3DO has later released it for Playstation 2 with improved graphics, but absolutely no change to the gameplay. Console gamers found it a little too hard, which, in my opinion, only proves the high quality of the game. King's Bounty is often to be found on eBay, and it would be a shame to pass on the opportunity to own not only one of the best balanced games ever released, but also a game that spawned a whole genre - fantasy strategies. 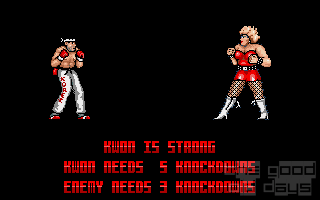