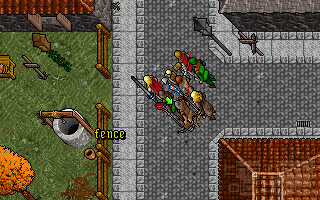 A mysterious being contacts you, the Avatar, menacing with a drastic change to the land of Britannia and, again, a gate is opened to carry you back to the kingdom, where nobody has summoned you as after two hundred years of peace the land is entering into a new age of illumination.

Here with this game the Ultima saga reached its best. Good graphics, with many animations and special effects; an interesting, and huge for the time, world to explore; and a good and immersive interface.

The objects go beyond simple decoration and battle use, many are useable just for realism and depth, you may flip a coin, open windows, fill buckets or make bread. Even the ones used when fighting are fun, like throwing a used diaper to you enemies, or blowing them with a gunpowder keg. And all this variety doesn't mean an overwhelming quantity of equipment, there is only a bunch of armours and weapons, and even fewer magical ones, just one kind of magical armour and a few magical weapons, but with distinctive qualities.

And the most distinctive one brings a big novelty to the series, the expansion. The Forge of Virtue raises from the sea a new isle, with a big and interesting, and dangerous, dungeon where are keept dangerous leftovers from the past and the lost test of the three principles. The awards for completing, that may be somewhat unbalancing, include the creation of the powerful black sword, hosting a demon which, if feed, will lent its powers.

But as fights are not a big part of the game the unbalance is not very noticeable. As in the previous one, your companions will act by themselves, following a simple pattern you mark to them. Being now in real time and not having a good way to see the condition of the party, it may also mean that they run to their death and leave their body lost in the forest, but more easily they will run away, even yelling and throwing the backpack and what they have in their hands, or fall uncounscious.

The game's dept can be seen continuously, on the weather system, in the characters that get angry, and may leave you, if you act unvirtuously, in the possibility of doing a job, in all the references it keeps from previous, and next, games, in the need to eat, in the many places that exist just for being explored and even in the choice you have at the end of the game.

Dialogs and quests, which keep being the main part of the game, have been improved. Characters speak better, say more interesting things, give lore and not just talk the minimum necessary for your mission and even react to the presence of another character. The quests are variated, and with a thinner line separating what is good and what is bad, but in exchange there are not many side quests. It should be noted that the main quest can be done in disorder, so knowing what to do you may even jump quickly to the end of the game but not knowing what to do you may end lost on it.

And also, as usual, the manual is something interesting to be read, not only for the copy protection, but for being the best one, wrote as if it was the handbook of the newly created fellowship. Who is the fellowship? Well, I have not talked of the story for a good reason, the main point of the game is discovering what's going on.

AVATAR! Know Avatar, that this game kicks arse… time to go back to Britannia!

Ultima VII continued the adventures of the Avatar, bringing him back to Britannia to save it once again. A roleplaying game at heart, Ultima VII improved upon many things from Ultima VI, including ethical decisions during gameplay, party inventory, leveling, world detail and especially the graphics.

The game's introduction shows you banging on a static-filled computer monitor, which then promptly goes to an ocean of blue waves. Through this the head of the Guardian, a red-faced devil (ahem… your nemesis), comes through and taunts you. You head back via a moon gate that transports you to the first city you encounter, Trinsic. A top-down perspective shows you a walled city, full of lively characters, each going about their own business. Immediately you're set on your quest by meeting an old fellow party member, Iolo, who is in the midst of a recent mysterious murder case. If you had the add-on, The Forge of Virtue, you'd also encounter an earthquake, but I'll leave that to another review.

As you investigate further a mysterious background story develops of a strange new religious group has recently appeared in Britannia, the Fellowship. They seem harmless enough, but are they? Following small clues of where to go next, your main quest branches off to numerous mini-quests, each adding to the story and reality of the world which you are now a part of. From solving silly little disputes to dungeon crawling after artifacts, the game immerses you into the world of Britannia. You'll have a lot of fun exploring the massive open game world and defeating the plans of the Guardian.

Ultima's graphics were, and still are, gorgeous. Though the resolution is low, the world is full of bright and detailed objects. The game's graphics aren't the only detail, the world is living with a lot of detailed things you can do. For instance, you can take flour and water, mix them together to make dough, and then bake it in an oven to make bread. Not that you'd want to do this all day long, but it is a detail that is very cool.

You can equip yourself with a variety of armor and weapons. I took the usual route, a sword and shield. But you can equip crossbows, spears, halberds, maces, axes, and so on. Armor is in the typical cloth, leather, chain, and plate. Some armor and weapons are magical, which usually have a glow around them. Each of your party members can be equipped quite differently, but you'll need to level them accordingly. Leveling happens when you go out and gain experience through combat, and then you can get trained afterwards and improve Dexterity, Strength and Intelligence.

Magic is a whole other ball game. You'll need have the spell in a spellbook if you want to use it, as well as any reagents needed, which can be very expensive. If you go this route, make sure you're related to Mr. Warbucks… because you'll need to be. This isn't saying magic isn't doable, it's just expensive to hurl off 4-5 fireballs at your opponent. But in dire need, you can heal and cure party members, and a variety of other spells. Even “fireworks” if you get bored, or Armageddon if you feel the world just isn't worth saving and you say “sod it all”.

The world is amazingly large for such an old DOS game. There's even a few Easter Eggs to find, including a Kilrathi space ship (from Wing Commander, another remarkable and memorable DOS game).

You're not always set on foot when exploring the world. You'll drive carts, steer ships, and even find a magic carpet. You'll need a deed, though, to gain the use of ships… no stealing them!

Ultima VII still has quite the cult following. You can play the game today on current hardware via software called Exult which allows a larger screen area, or through DosBox which keeps the old interface and resolution.

Ultima VII is definitely in my top 5 DOS games ever. Its just that good. So, Avatar… ready to go back to Britannia? 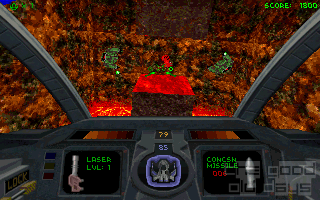