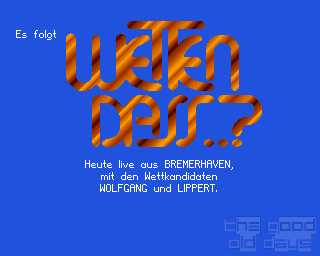 Warning: Even though I normally try to treat both language versions of the site equally, there are situations in which this is impossible. This review is such an example. This English review will be a boring read to everyone who isn't familiar with German television, because it mostly consist of references to the popular TV show which the game is based on. You'll still learn something about the game, but I won't promise it'll amuse you much.

A rating of 40-50% like in the days before private television (there is already begins: private television has only been established in the mid-80s in Germany - the stations maintained by the state had a monopoly before; this is the last of these explanations, you're on your own from now on) is something only one show regularly reaches: “Wetten Dass”. For whatever reason. It's not that the show has anything to do with betting (“wetten”) anymore, the 'bets' of the guests whether someone is able to do something has been taken from the centre of the show in the late 80s already. Most of the time, the few pseudo-celebrities who show up there every time get the opportunity to advertise their latest 'projects' in extremely boring and predictable chats.

In this computer game, neither Phil Collins nor Rod Stewart appear surprisingly enough, and there are also no 'actors' nobody has ever heard of before sitting on the sofa. Where's the link to the show then? Oh yes, almost forgot the 'bets'!

That is where the player comes in. You don't have to do any betting (the word is ambigous in German): you have to fulfill certain objectives which are about as imaginative as in the show itself. Most of the time, someone claims he/she has remembered everything from some strangely unfascinating and unimportant subject. Learning to recognize all songs by the Beatles played backwards or memorizing the structure of all toilet paper on the market would be a bit too much for a little computer game. That is why you get Memory. Again and again. But wait - a variation! Instead of finding matching pairs of pictures, you have to remember the names of pictures. Oh, great.

Then there are action-driven 'bets' in the show. Undressing women with a bulldozer, lifting trucks with one arm and so on. In the game, there is exactly one variant of this: you always control a helicopter with which you have to pick something up (using a rope) and then drop it somewhere else (e.g. put a car on top of four beer glasses). The mouse controls are so slow and inaccurate that you wonder why something didn't work, but you're also surprised if the game suddenly tells you you've won this 'bet'.

As a last feature, there are “outside bets”. I'm using this very clumsy translation of the original term to lead over to how they're played: outside the computer! You're presented a task to fulfill (e.g. find five spoons in 30 seconds - how inredibly thrilling). When you're done, the game asks if you've managed successfully - and this answer then influences the final “outcome”.

All the time you're sitting in front of this game, you'll be asking yourself, why you have the computer running at all. All these 'game elements' could just as well be played with a pen and a sheet of paper, and then you'd even have more variation and more certainly more interesting tasks. Maybe even watching some singer who used to be famous some decades ago moving his mouth is more exciting than this game. Then again, maybe not. 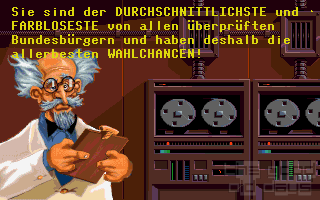