Veil of Darkness
for PC (DOS) 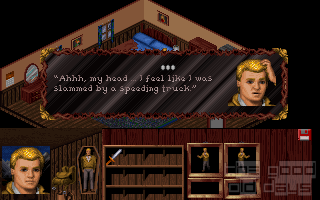 A sudden cloud of bats splashing in your airplane forces you to land in a lost, dark and small valley. A place ruled by a vampire, and where, ignoring it, you have started to fulfil a prophecy of freedom.

As expected, it tells in an ambiguous way what you should do. But if you can make sense of the thing it's a great help. Basically, each line or pair of them is a quest, they do not have to be solved in order, but for the last part, the death of the vampire, you will need to accomplish all the previous ones.

While the game is an adventure, fights have their importance. Few places are free of skeletons, zombies, vampire women or other undead creatures. But beating them isn't much fun, just get near them, press the icon of your equipped weapon, wait for the delay to finish and press again until your character or the enemy dies or you flee. Luckily at the beginning you can choose the complexity of those combats, which I assume is how hard or easy killing the monsters will be.

The thing could work without them, and it is noted in the many objects related to fighting that will serve mainly for encumbering your character. Potions to increase strength, plants to cure poison, disease or weakness, holy water to easily kill vampires or potions and crystals for healing, which aren't that great when you can easily escape and visit the gypsy healer, they are, except for some plants, in greater quantities than those you need.

What is good of the game is the plot, the valley filled with dangers and cursed where everybody is scared, many hide dark secrets and things work according to legends. Werewolves are forced to transform when accused of being so; cursed spirits are bound to important objects of their life and there are plants that mark murderers.

And so, much of what you do is talking, this is the way you will get the important clues and information, which not few times should be typed in a box prepared for that, and then with it you will act, have some not very entertaining exploration in labyrinths of caves and bushes, and solve the puzzles.

I remember seeing this game at a friend's place a long time ago – and it made me quite jealous. The game is excellent in gameplay, settings, athmosphere, graphics and addictive factors… that's right, Veil of Darkness scores in all categories!

You are a pilot who has, without intention, attracted the attention of a vampire deep in the Transylvanian mountains. With a little help of his little bats, he manages to make your aircraft crash into a misty valley. As you slowly regain your consciousness, you find yourself in a city where time stood still. In fact, it seems time stood still for a hundred years already. Folklore and myths make up most of the life here – not just in talk and thoughts. Werewolves, vampires… they are all too real and they begin hunting you soon.

Veil of Darkness is very similar to Ecstatica. Both games have got a mystical/horrific athmosphere and you have to travel a long way to reach the evil overlord.

As I said before, the game is perfect in almost every respect. Basically, there is only the intro tune which can be mentioned in a negative light, because it can become quite monotonous. Afterwards, the rest of the music is simply amazing!

The controls need some getting used to – don't despair: You m ove around with the arrow keys, the numeric pad or the mouse. You attack by clicking on one of the two hands at the bottom of the screen. This also works to use items, like the crowbar.

It should be mentioned that during dialogues, you can enter key words yourself. This means that you will only find some conversation branches and puzzle solutions if you enter the right words. All of these are well hinted at in dialogues with different NPCs, though.

On the whole, a great game for long, dark winter nights. If you enjoyed Ecstatica, you will also like Veil of Darkness. Two thumbs up!

We got this game in 1993. I was 12 years old by then, and me and my brothers became instantly and automatically addicted. We got the Spanish version (I'm from Barcelona).

From the very beginning, my younger brother was scared to the bone by just watching the game cover. We installed the game and watched this awesome introduction, where you understand where your character exactly is and what happened to him to arrive there.

After a plane crash (due to the interference of the evil), the main character miraculously survived and recover thanks to the attention of a young and beautiful lady, but soon, things start to seem wrong. Stuck on a remote Transilvanian village, where no one ever seen an airplane (they call it “the monster”), the character find out that he is on a haunted town ruled by evil forces of a dark soul. A lot of people disappeared and were found dead under strange circumstances lately, so your mission is to help them. They believe you are the one who will set them free. Each character have its own attitude and behavior, and each one have a story on his back, something that want to hide on this village of shadows.

The game is basically one those good graphic adventure video games that we all played and loved. You will have to investigate each room, down the beds and inside the wardrobes, to find the missing object that will let you open the mysterious door, or to convince someone to give you a car ride to some other place where your adventure will continue. You'll have to talk to each character, paying attention to every little detail of the conversation because, sometimes, you are stuck and have no idea about how to advance, and the clue is just in front of your eyes. It happened to us more than one time with this game, but asking the right word to the right person, or pushing on the right place can make you succeed!!

The atmosphere of Veil Of Darkness is just awesome, and the music helps a lot to keep this creepy feeling all the time. Nice graphics, weapons, items and, on the top, a really interesting history that will keep you as amazed as we where during 1993.

Moebius (2015-07-01):
I remember playing this, it looked great, but... something was missing. It lacked the adventurous spirit somehow, plus puzzles were a little too difficult as it seemed back then... i never finished it cause i totally lacked motivation.
Crosstown (2012-02-23):

I remember it also, lots of talking to people, and wandering around finding more people to talk to. I remember doors that did not open, and when (after what seemed like hours) something did happen, I died.

To be fair though, I was expecting more of sequel to "The Summoning" and was disapointed. But after all these years I may give it another chance.