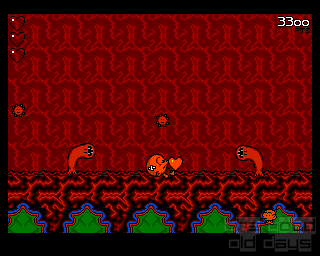 We always have to remind ourselves what large role outward appearence plays in a highly formulaic genre such as jump 'n' runs. Particularly, a lot depends on the protagonist design. After all, what is it that has become so iconic from the most famous genre entries? Of course, it is Mario in his bibs and Sonic's trademarked spiked head. Bonk first saw the light of day on the PC Engine in the late 1980s. This miracle machine of the 8 bit console generation never had its big break in the western world, however. When German developer Factor 5 ported the game to a much more common home computer some years later under the name of B.C. Kid, it therefore still appeared quite fresh. 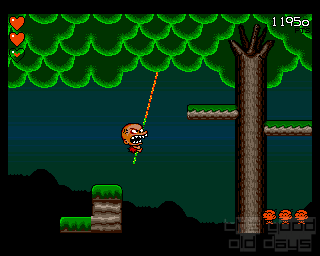 And lo and behold: the protagonist is quite recognizable! The caricature childlike characteristics of this pre-historic baby show in its giant head… which almost immediately gets the centre of attention in the core game mechanics as well. It is because only this tough-as-nails skull can punch the enemies out of the game. Courageous head butts or headers soon become the main activity. The tiny arms and legs nevertheless showing cutely animated tension.

Things don't end there, though: climbing up works by literally sinking the teeth into walls. Fruit regenerate life energy, but meat consumption pumps up the abilities of the vegetarian hero – also accompanied by another funny animation (fuming ears, waggling arms), of course. 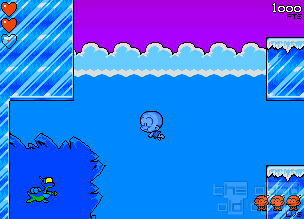 All this takes place in quite varied levels. The blocky design, doing almost completely without slopes, reminds of something like Duplo world. All of sudden, volcanoes emerge from the ground; another time, you'll be tiptoeing over a dinosaur's back; then you'll swim and dive through a lake (or other liquids); you'll swing on lianes in best Pitfall tradition; skid over ice (whoops, there are slopes, after all); sink into quicksand… the different level designs not just changing visually, but introducing new gameplay-relevant elements, keeps motivation high. Though the same unfortunately cannot be said about the opponents.

The fair difficulty level enables quick progress. This, on the other hand, makes the game seem rather short end-to-end. Still better this way than keeping players away from the ending through frustrating passages.

Nevertheless, it has to be admitted: the game does not re-invent the genre. It doesn't even vary it in a significant way. By the beginning of the 90s, it was already rather common to introduce a special gimmick into one's game. This only occurs in B.C. Kid as far as visual design is concerned, after all. The protagonist sprite and its movements are rather memorable. Its adventure is entertaining, but it showed a little bit of age already in 1993.

Conversions of console games to computers often go wrong. Translations of Japanese games just as often. With B.C. Kid, it went surprisingly smooth. It first appeared on the PC Engine and had (for 'western' tongues) a really strange name. The English version became 'Bonk'. Bonk? To make a long story short, the Amiga version got a better title when it was ported by the German company Factor 5 a few years later.

Basically, B.C. Kid is your typical Jump'n'Run hero. Evil forces have turned his prehistoric friends into monsters without free will, so the kid first has to get them out of evil's grip and then destroy the root itself. To achieve this, there are numerous levels with lots and lots of monsters to clear.

Following the genre convention, enemies are defeated by jumping on their heads (I really wonder who first came up with that and for what reason). At least there is a small variation to be found here: B.C. Kid can only distribute hits his his own head. If he lands on someone feet first, he's the one losing energy himself. So, it's diving down head first - don't try this at home, folks.

Another speciality of our hero is his eating habits. Normally, he's a vegetarian, and fruit refills his energy. If he does eat meat for a change, he turns into a raving madman, being able to jump further and taking a hit without even blinking an eye.

Crumbling platforms, hidden bonuses and lots of cute, childish background and foreground graphics - B.C. Kid has it all. Playability is there as well: Unlike many of its competitors, it's not full of unfair scenes. The latter alone already makes it a safe recommendation. What could certainly have been done better is change. Apart from the normal outside levels, there are underwater parts, but it could be more. No complaints about what's there, just about what's not. 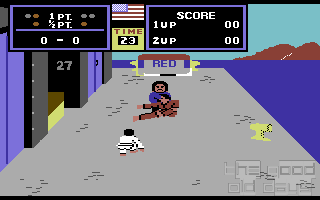