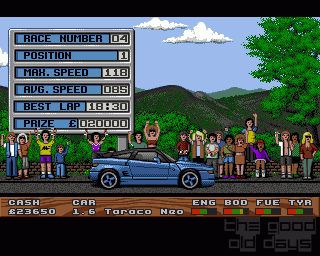 Racing games weren't always in pseudo 3D. For instance, there were Sprint and Super Sprint (which was never ported to the Amiga, but that's a story for another day). Super Cars is a home-computer-original variant of the same idea, and quite a good one.

You're looking at the course from the top, with your car always roughly in the centre of the screen. The 'camera' is quite close to the action, i.e. you can't see the whole course at once. Starting the race in the last position, you have to fight your way to the top and finish as one of the first three. If you don't, it's game over. The first three positions, on the other hand, not only let you move on to the next course, but provide you with a nice sum of prize money (20000£ for the winner, 12000£ for the one placed second and 5000£ for the third) which you can use to buy extras for your car (more speed, better tires and even missiles) or even a whole new car model altogether.

These upgrades are more than necessary, because the other drivers aren't sleeping, either, and while driving skill certainly is important, it can't make up for every technological disadvantage. I.e. you won't win any race with the initial car after the first few ones. Buying car upgrades is pretty straightforward (just select what you want and hope you have sufficient money on you), buying a car is a completely different affair, on the other hand. As if he were related to Monkey Island's Stan, the car salesman expects you to haggle. This way, you can reduce the price quite a bit, but if you say the wrong thing, it can also make the deal impossible, because the salesman is pissed off. Although the haggling is very funny, this is obviously a controversial feature, because it means there's quite some luck involved. Trust me, if you didn't manage to buy a new car because that guy took something you said the wrong way, and then you don't get placed in the following race because of your cranky old car, you'll be cursing this feature.

The courses, on the other hand, are above all suspicion. They're well layed-out and spiced up with an occasional spot of oil (making it slippery) or sand (slowing you down). On the whole, there are 27 courses, so more than enough to keep the player occupied for a long time. Another positive feature concerning this is that you don't have to follow the order they're in slavishly, but you can choose any out of a set of nine right from the start. That way, you can wait with courses you're not particularly good at until you get a better car, for example.

Super Cars is a lot fun to play. The only big change from Super Sprint is the graphical perspective, but I actually prefer this one here, because everything is bigger, and I can control the car more exactly this way. The only thing missing is a two-player mode... 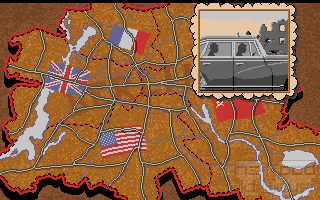