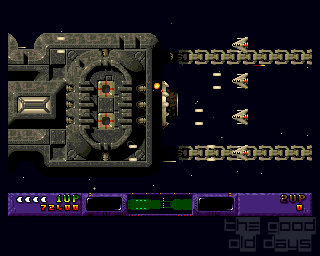 When Uridium first came out, it was breathtaking: great looking, lovingly animated and incredibly fast at the same time. As the years went by, such qualities gradually lost some of their effect, of course. Still good, still (relatively) impressive, but not a sensation anymore.

When Uridium 2 was released in late 1993, so many other impressive games had been made in the meantime that this sequel didn't produce the attention it would have earlier anymore. Marketing-wise, it was just too late. Technology-wise, on the other hand, it came at exactly the right moment - i.e. when a real jump was possible.

Players of the predecessor will feel right at home: The small and agile Manta ship doing its insane attacks on huge Dreadnoughts, twisting and turning around its own axis to avoid incoming missiles, change direction and blast as much of the accessable surface structure up as possible. All this presented in visual and aural style worthy of the high standard the original set - only pushed into the times of the release of the second part.

Once again, still pictures (like screenshots) can't really do the graphics justice. Only live and in action, you'll really be able to appreciate the excellent style fully. Just when you thought you've seen everything technology-wise, something like this smacks you right in the face, leaving your mouth open in amazement!

The only substantial change in the gameplay (as opposed to the additional weapons and the extended two-player mode) is the infiltration of the Dreadnought. After landing, a human sprite equipped with a gun appears close to the ship's core. Floating around, you have to shoot at the core until it blows up. Makes more sense than the simplistic button tapping of the first part, but the execution is so bad that this scene leaves the impression of a rushed job which hasn't been given much thought.

So, in the end, Uridum 2 isn't much more than Uridium with a new 'skin'. Maybe that's bad, because it provides nothing new. Maybe that's good, because why change a good idea? In any case, if you see it as an official remake, slightly toned down in difficulty, instead of a sequel, you should get the idea. And that should also tell you whether you want to play the game or not.

Mr Creosote:
Quote:
When Uridium first came out, it was breathtaking: great looking, lovingly animated and incredibly fast at the same time. As the years went by, such qualities gradually lost some of their effect, of course. Still good, still (relatively) impressive, but not a sensation anymore. 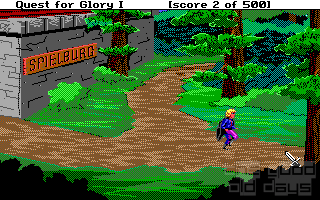