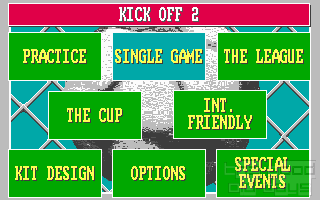 Fast, furious, involving - GREAT! That's Kick Off 2... on the Amiga. On the PC it's somewhat fast... and well... that's basically it. Everything that made this game the best football game on the Amiga was left out on the PC. On first sight it seems to be there, but then the handling is just not quite the same... The slight border was crossed and now you will just run past the ball if you're one pixel too far away, however you can count on knocking the ball away when you just wanted to run around it. You can pretty much forget about the kind of handling the Kick Off series introduced back in its Amiga days... it was perfected later on in the Sensible Soccer series - however pretty messed up here in its PC version. Also the AI is pretty stupid. On the one hand you have your own teammates madly kicking the ball back into the direction of your own goal as well as spinning around for no obvious reason. Fortunately the players in the computer's team do the same kind of stuff as well, so that makes up for it.

However... I did not really find the game very playable, which is a shame as there's everything there you need in a good football sim. League, Tournament, single matches etc. - if they would just have cared a little more about the handling and probably invested a thought or two into the graphics this game could have just been as good as it was on the Amiga. *sigh* And it was one of my favorites there - best played with a friend.

This leaves this gem-in-theory as sort of a curiosity. If you remember Kick Off 2 from “back then” think twice before downloading, this might ruin some good memories. It simply is not the same, but reveals a basic problem in the late 80s going on to 1990: The Amiga used to be the superior gaming platform. When the PC started to catch up it just wasn't enough to copy games over, the PC was - and is - a different system. The slight differences made more than just this one game unplayable. Take this one for your private museum, but don't be disappointed if you expect to relive the old days. 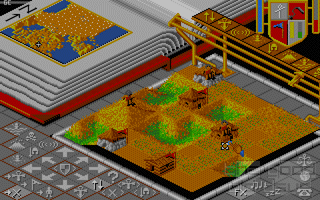