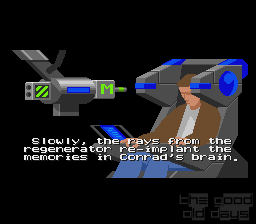 Wandrell:
When I played the game as a kid I recall at least once getting stuck on the beginning of the second stage because of that. But if you run pressing up (I think it was up) he jumps automatically when reaching the border, or when he can reach a platform.
Mr Creosote:
Back when computer game magazines were still carrying floppy discs on their covers, I got a demo of this through that channel. It was one of the few worthwhile ones ever to come with that magazine - but still not enough to make me buy the full version, because apparantely, the game included 'exact jumping' (you know... when there are gorges which you can just jump over if you take off from the very last pixel). This 'feature' already made Prince of Persia unplayable for me

Wandrell:
Feel free to share anything about Flashback (1993) here!
[Reply]