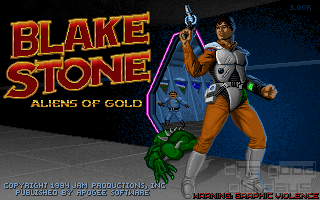 I always felt like this game got a bum rap because it was essentially an Apogee-published follow-up to Wolfenstein 3D using the same engine. Personally, I thought it was a fantastic follow-up, enough so that I spent my hard-earned money as a poor teenager to purchase both the original games as well as the retail follow-up, Blake Stone: Planet Strike!

To this day, I'm totally enraptured by the Wolf3D engine! For me, single-player FPS games made with other engines just lost their appeal after this era. With Blake Stone, I loved the sci-fi storyline, and I love the tunes, if not some of the specific instruments that were chosen (I'm not sure if they were trying to stay within Adlib-friendly instruments or what!)

Like Wolf3D's “Achtung!” many of the monster sounds in this game are iconic to me. I can still hear the sound of the fire-ball spitting monster which always warned me to stop what I was doing and hunt him, or just to run like hell!

Graphically, this game improves on a few things to me. Because of the sci-fi theme, there is more variation in the wall panels. The monsters are appropriately cartoonish, with just the right amount of gore to keep me happy.

One thing I also liked about this game, whereas Wolf3D game your gunshot sounds warning you of incoming fire, many of these enemies followed the example that can be found in later games such as Doom, wherein many of the enemies made noises announcing their presence, but not necessarily when they were trying to damage you! It made things challenging, as you could more easily be snuck up on, and things could occasionally get frantic!

I felt that for the most part, level design was well done, and to this day, I have yet to complete the game with 100% of all treasure/secrets found (though I should probably also state that I've yet to ever look up maps or otherwise cheat to try and find them even in all the years that have passed since I first purchased these games!)

While I can't be 100% sure Blake Stone was the first occurrence of this (just the first occurrence of this that I saw), a design implementation that I really liked, which was later copied in virtually every FPS game after this, was the implementation of food and health dispensers. No longer would you wander around looking for power-up pellets, dog food, or whatever laying about randomly on floors where they made absolutely no sense! No… here, there are actual vending machines and first aid kits – on walls! – that you would walk up to and take items until they were empty! And they were in places that made sense – vending machines in common areas, for instance, and health first aid kits near common and high-risk areas. You know! – where they actually might be placed in real life! A nice innovation, to be sure.

All in all, if you're like me and enjoy games created with the Wolf3D engine, Blake Stone: Aliens of Gold and it's follow-up, Blake Stone: Planetstrike! are worth a look, or in some cases, a second look. I think that you'll be pleasantly surprised, as to me, this game, much like Wolf3D, still holds up well as a fine example of the early FPS genre, as well as arguably the finest examples of the power contained within the Wolf3D engine.

You are a space super-agent. And how do these people expend their time? Saving the world, of course! So here you are on your way to get rid of Dr Goldfire, the menacing evil guy, and his evil army of mutants and aliens.

This is basically and improved Wolfenstein 3D with lots of neat details added, you can see they were trying to make something fun and new instead of just a new shooter. And one of the ideas they had was getting you on problems for going trigger happy. Not just because you can shoot at the typical dangerous canister stored on really not safe places, but because there are informants around the place.

Some of the technicians working for Goldfire are on your side, so you can walk to them, talk and get a bit of info, some food tokens for buying health at food machines or maybe a bit of ammo. If you are not lucky the guy you talked to will be loyal to the bad guy, and they have quite a bad temper along a ridiculously small yet lethal pistol.

Shooting around will scare the loyal ones, a good way to find which ones to kill, but bad guys are not deaf. If enemies hear loud noises like screams or shoots they will start looking for you, so if be careful or you will get surrounded.

Luckily they can’t see what is behind them, and the basic pistol makes no sound. Not that it really matters much, there are few opportunities for stealth, a shame because the game is really hard, and you can already go from floor to floor without needing to explore the current one completely. A bit of improvement and this would be a shooter where you have to kill as little as possible, a great idea, even when time has shown these stealth shooters are more about shooting than stealth.

So they where trying, but it ends just as another shooter, fun for a time and repetitive. As I said it is just Wolfenstein 3D, on space. 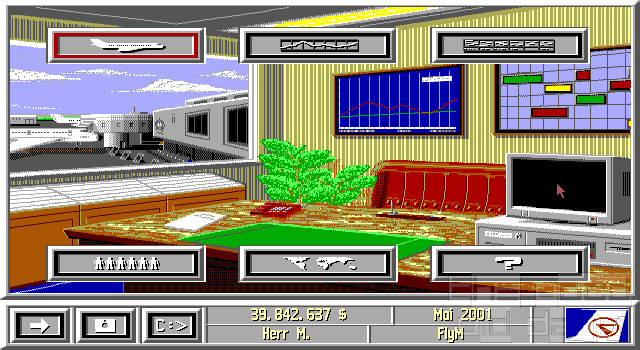