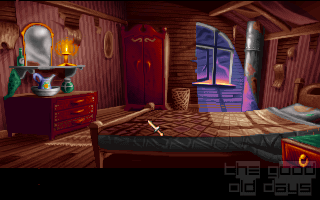 In the late 19th century, strange things are happening in the remote western town of Silverload. One of two scientists who are sent there to retrieve some objects is attacked by the Werewolf inhabitants in the prologue already and the other one goes into hiding. Another family which was just passing through isn't spared, either. This time, the evil monsters take a nine-year old boy with them. The player takes over the role of a gunslinger who happens to pass by the family's camp. Hearing their story, he decides to enter the cursed town and retrieve the child. 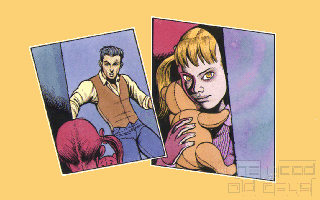 Girl with pigtails holding a teddy bear - must be evil

Silverload comes from the same team which also made Daughter of Serpents, and it inherited pretty much all of the gameplay related problems from that previous game. The controls are horrible - while moving, your perspective constantly changes, so you'll get lost all the time. Graphics are, for whatever reason, inferior to the older game. The story is spelt out right from the (admittedly well-done, made in comic panel style inconsistent with the rest of the game) prologue, so no real thrills there. Puzzles are still pretty much non-existent. Needless to say, the best part of the previous game, the character generation, has been scrapped completely. So there aren't any alternative story branches or different puzzle solutions anymore.

If you forget to barricade your door before going to sleep, you're dead. Don't worry about the open window, though.

Instead of real puzzles, the game offers another 'feature' to keep the player playing for longer than the incredibly short predecessor: Countless scenes of instant and unavoidable death. Walk around town for too long after dark? Throat ripped open by Werewolves. Open the wrong door in your hotel? Slaughtered by Werewolves. Walk to the house a little outside of town? Killed by some frail old guy and eaten by vultures. Yes, all that is really fun - the game designers have to be congratulated for this incredibly amazing gameplay! 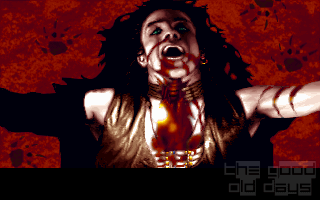 This is so bad that even if you've got a walkthrough at hand, you'll have serious problems finishing the game - or even survive the first evening. Once you get to the second day, there is a short glimmer of hope. As you're walking around town in daylight and meet the inhabitants, all of whom basically tell you to leave immediately and who are otherwise unresponsive to your questions, there is a certain feeling of gloom and mystery. Or those scenes could have produced that feeling if the player hadn't already been told they're all Werewolves in the prologue. Could have been good at that point: Why is everyone unhelpful? What is it these people are hiding? Then slowly revealing the city's secret.

Though, due to sloppy and inconsistent storytelling, it never comes to that turn of events. And then there's always the next death around the corner, because you clicked on the wrong pixel on the screen. Great. Just great. Why don't they make more games like that? At least we would have more easy targets to mock here on the site then. 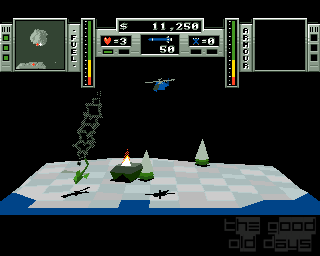