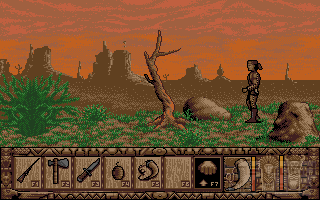 You are a fearless trapper who seems to have only one reason for being on the west: killing indians and walking a lot. Ok, that were two reasons, but they will be what you’ll be doing on this game. A bit simple game, but which is, as usual with Silmarils, different from the usual.

The first thing is that I can’t say this is an adventure game, and also isn’t exactly an action one, mixes from both, but not on a clear way. The adventure part is walking around gathering items, but you can’t move around without getting rid of all the violent indians.

For what I know your objective is walking around and advancing until you reach some place, there is nothing clear about it, as there is no plot, no clear goal. You walk, kill, get what they dropped and take what you see around, until you find the trader, where all those things quickly become gunpowder, potions or explosives.

Maybe you supposed it from the first two items, but there are two bars here: gunpowder and health. Both of which will keep getting lower with time, because you will use your rifle to quickly dispatch enemies, and because it isn’t possible to avoid all damage.

But as with everything on this game, never becomes the nuisance of “I’ll die in the next screen no matter what I do, no doubt”, nor “it would have been better buying a slingshot, this rifles demands constant gunpowder”. It isn’t an action’s game health bar which serves just to bring you to death, nor is the gunpowder a survival worry like it happens on some adventure games.

The game stays on the middle thanks to being quite simple, you keep advancing, sometimes you can save and then you reach different zones. No more. But it does ok what it offers, the game may not be one of the best, but still has some distinctive style that makes it entertaining and different.

Moebius:
The comparison list lacks only Starblade, another Silmarils game that looks much like both Colorado and Metal Mutant. Actually... i may give it another go some day and perhaps a post a review on it.
Wandrell:
Feel free to share anything about Colorado (1990) here!
[Reply] 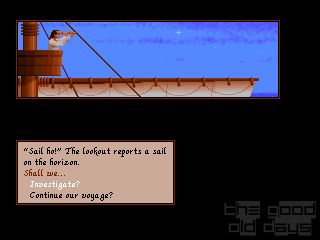