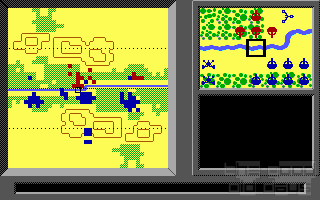 I usually try to present each game in its original version, i.e. on the system it was initially developed for. For Modem Wars, that would be the C64. However, I have to admit I can't get that version to work in my emulator - most likely due to my inability to set it up to emulate a modem connection. Since writing a review purely from memory violates the standards of the site, I had to go with the IBM PC port released a little later - please excuse this slip and if anyone can lend a hand getting the C64 version to run, feel free to drop me a line.

Further on the version I'm reviewing (and offering for download) here: This version has been released as 'Shareware' by lead designer Dani Bunten herself in 1996. This release has had the original copy protection 'cracked' by Dan Hite, collaborator of the original version - the game's source code had already been lost by then. As for it being Shareware, Dani writes: “I hope you enjoy it enough to give copies to your friends. My lawyer instructs me, however, to remind you this is copyrighted software and in order to remain legal you should send $5 to me” (read the full story in the readme.txt included in the download). Two years after writing this, she died. It doesn't get much 'more Abandonware' than this.

So, let's at last talk about the game itself (and as a final remark: I remember the original C64 version to be pretty much identical). Modem Wars is a groundbreaking war game: It was way ahead of its time, because it allowed two human players to compete against each other not via split screen or in a turn based manner, but in real time on two networked computers. As the name indicates, the computers have to be linked with modems, or null modems alternatively. That way, each player can use his own monitor / TV and keyboard exclusively, and the game can be played over long distances as well.

In different scenarios, each player takes over a robot army consisting of four basic unit types. Grunts are basically 'foot soldiers', Riders are 'cavalry' (i.e. faster), Boomers are artillery and Spys are unarmed reconnaissance units. Additionally, there is one special unit: the Comcen. That's your 'command centre', i.e. a transporter vehicle from which you give your orders. The Comcen itself doesn't have regular weapons, but you can launch two things from it: Missiles and Drones. Drones can do further reconnaissance and you can explode them at will, doing damage to a four square radius. Missilies can be used to target specific units (e.g. to shoot down enemy Drones). It is each side's goal to destroy the enemy Comcen while protecting its own.

The game offers quite a few tactical devices. For example, the terrain can offer cover for sneak attacks or slow the enemy down. Units can be grouped and put into formation. They can be commanded to dig themselves in (for better defense), to go into 'blitz' mode (for faster movement) or to enable camouflage. And, once again, you only see what your units see.

With a game like this, it has to be explicitely noted that there is a single player mode as well. In that case, the computer takes over the role of the enemy army. Mind you that the game was designed to be played against another human, though, i.e. the AI isn't great. Enough for basic training (which is, incidently, how this mode is labelled in the game itself).

The relatively weak AI is often cited as the main reason why the game didn't do well commercially. While that may have been one aspect, here's another thought: Who owned a modem in the late 80s? And of those few people, who could (or was willing to) pay for all those expensive modem calls to play against a friend? Which makes Modem Wars an example of the work of a true visionary - but technology and people's mindset (and also the phone companies with their payment structure) weren't ready at that time yet. Too bad, because the game was also ahead of its time gameplay-wise. When the term 'real time strategy' was coined many years later and the genre really took off, those games released then were all a lot more shallow than this ancestor (and an AI was usually non-existent in those games). Pity, because Modem Wars had shown the right direction... and been ignored. 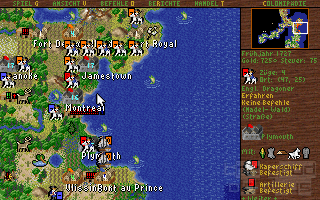