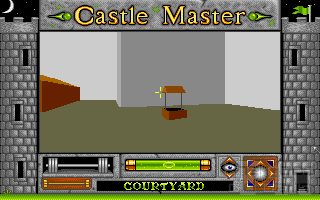 Freescape was a big deal in 1987. Today, it would be called a 3D engine; probably the first of its kind. Not that the term existed back then. Allowing free movement within three-dimensional space instead of the step-by-step approach common in role-playing games of the time, it features a fully 3D modelled world, the ability to look up and down, height levels, different movement modes (crouching, walking, running) – all of those being features which even engines considered groundbreaking several years later, such as Ultima Underworld or Doom, did not make possible. 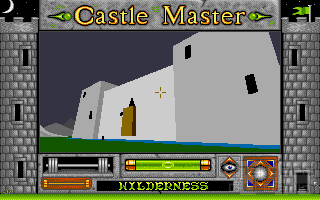 The game best remembered from this series remains Castle Master. Actually the last full title in the series (two more followed, but they were re-hashes of previous ones), it can indeed be considered the culmination of what could be achieved with this technology. Set in a cliché fantasy world, the plot is as simple as it gets. Save the prince or the princess. Enter the castle, face its dangers and reach the inner sanctum to defeat the final boss.

Meaning as the games which came before it, it is primarily built around showing off its technology rather. The game as designed is as simple as it gets; essentially, it is a glorified maze. Progress is regulated by locked doors and hidden pathways, keys and switches. It works quite effectively and the castle architecture with its open courtyard, the battlements, the towers, the barracks and the crypt is put to good use. Overall, the castle layout appears functional, with logical rooms (a kitchen, a stable etc.) as well as some rather freaky locations likely put in for laughs (the football field…). 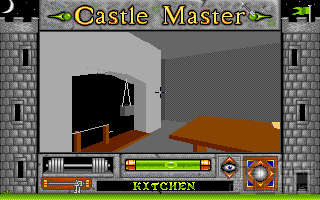 Don't forget to search inside the cooking pot

The challenge really comes from the necessary exploration. This is where the freedom of movement enabled by the engine shows its strengths. Objects or doors can sometimes only be spotted when explicitly looking behind things, at the right angle etc. Those who, based on today's expectations from 3D shooters, think they can just go hunting for enemies which make themselves visible by charging forward will miss objects essential for the final solution.

Said enemies appear occasionally, conveniently announced by a flashing screen. Most of them are disposed of rather easily once spotted, with a generous health bar and ways to replenish it available in various places. Them being modelled in vector graphics, the level of detail is rather low. It still works well enough for the ghosts or the bats, but the dragon and the mouse look rather poor. On top, creature animations use very few frames. 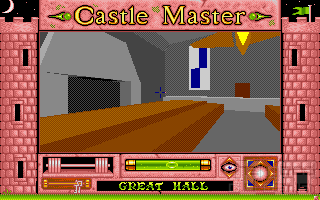 In the same vein, while the window into the game world is comparatively large, the core of the engine itself – player movement – is quite slow on a standard A500 machine. Luckily, it does improve on faster CPUs. Another modern-day observation is that movement feels rather like floating rather than walking. Which may have made sense in the earlier Driller and Dark Side, but not anymore since the immediate predecessor Total Eclipse.

Back in 1990, those limitations were completely acceptable. In fact, they didn't even occur to most players. The fascination of Freescape was strong and the technology could carry an otherwise non-notable game. Nowadays, having seen superior (later) 3D engines at work, this one just feels old. Core gameplay is neither sufficiently frantic, nor ingeniously tricky to let us look beyond today. What was the game's biggest draw at its time has turned into its ultimate bane. After all, even by the early 1990s, Freescape games stopped. The world moves on where yesterday's technology is concerned. Which does not take away from Castle Master's legacy. Though if you decide to give it another spin, be prepared for your fond memories to be disappointed.

If a game primarily tries to sell its technical merits, its plot is quickly pushed on the back bench in the development phase. That is probably why this part of the Freescape series (a series known for its free-movement three-dimensional graphics) sends the player on the standard quest of the standard quests: The player takes over the role of either a prince or a princess whose respective counterpart twin has been captured by a magician. The player enters the baddies' castle on a rescue mission, but before he or she can enter the actual dungeon, he or she has to find ten items spread all around the castle.

Nice kitchen
The polygonial surroundings are a little more detailed than in earlier games (in the stables, you'll find a horse, in the barn, there's a dung fork and so on), but it's also slower. The game is well playable on a standard A500, but a faster CPU definitely pays off.

Gameplay-wise, there are a few encounters with ghosts and monsters which can be taken out by throwing rocks and who will eat at the player's energy bar before that happens. Food regenerates this life energy. The main task is finding one's way through the castle, though. Basic mapping skills are a definitive requirement. Along the way, there are also a few simple puzzles.

In the end, none of this is really exciting, though. It's nice to roam the corridors, to search the rooms and to find secret passages, but on the whole, not much is happening. That's the curse of these 'technical marvel' games: They don't age that well. Although the game's graphics are good enough, they simply aren't impressive anymore for obvious reasons. If you are into this genre, you won't be disappointed, but other than the historical importance, there isn't much of an incentive for anyone else to try the game. 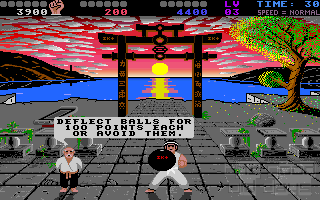