Broken Sword: The Shadow of the Templars
for PC (DOS) 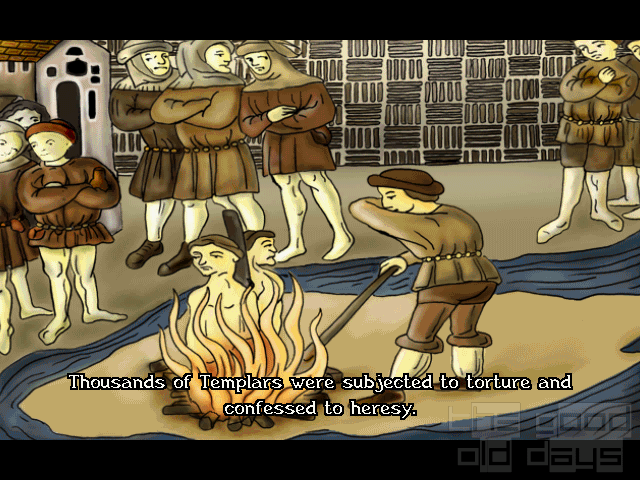 American tourist George Stobbart is enjoying himself sitting in a cafe in Paris when he witnesses a murder: a clown plants of a bomb and an older man in a grubby raincoat who had been eyeing the young waitress just a moment before dies. The clown escapes through the sewers. Because he has nothing better to do, George decides to investigate on his own, meeting the journalist Nicole (Nico) Collard who supports him for selfish reasons. They uncover a conspiracy involving the order of the templars... Looking at the current bestseller lists of novels and the cinema charts, Broken Sword hits a popular theme there.

In typical fashion of the time, the game is quite an easy one. Although it takes considerable time to finish it, this is not due to brain busting puzzles, but rather because of long dialogues of frequent occurence. These dialogues are carried out by selecting icons (representing topics of conversation) - fortunately, these icons disappear after this topic has been exhausted already (i.e. if you've already heard the reply). The relation between conversation and puzzles goes as far as many problems being solved by simply exhausting all dialogue options - George Stobbart apparantely likes bossing people around. 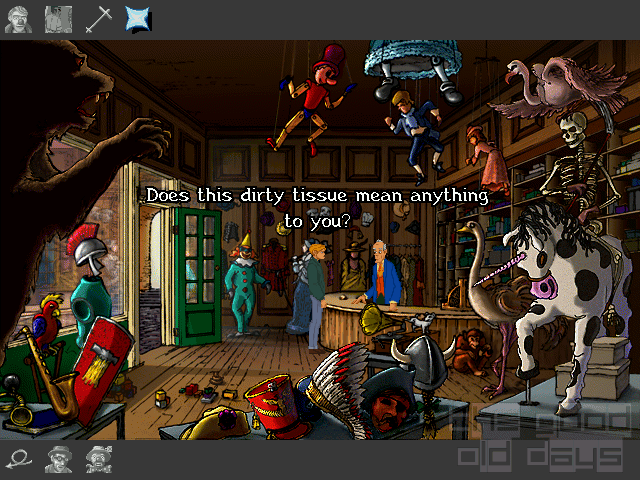 George Stobbart at his favourite pastime
Talking about the protagonist, it has to be said that he's one of the most faceless persons ever to grace (?) the computer screen. He seems to have virtually no character on his own. He's the perfect boy scout (although he claims he's never been a scout - though the fact that it comes up in the game at all should tell you something, too): Nice to everyone (even his professed enemies), never voicing a firm opinion. And always showing people his used handkerchief, asking them what they think of it. And his French must be very good, considering he manages to convince some people he's a French police inspector...

That said, Broken Sword's strong points mainly lie in its Paris setting: Travelling around the locations, you can see gorgeous hand-painted backdrops, some of them showing well-known buildings or landmarks. Also, due to its low difficulty level, it's a game of easy rewards and quick progress. That is why the player is very unlikely to ever get the idea to just quit playing the game - unless he/she hates reading / listening to lots of dialogue.

I can sum up my, and most of the internet feelings about this game in one single word.

and you all know what I mean. (Assuming you've played it)

If you dive into this game, be prepared to google.