Pick Up the Phone Booth and Die
for Interpreter (Z-Code) 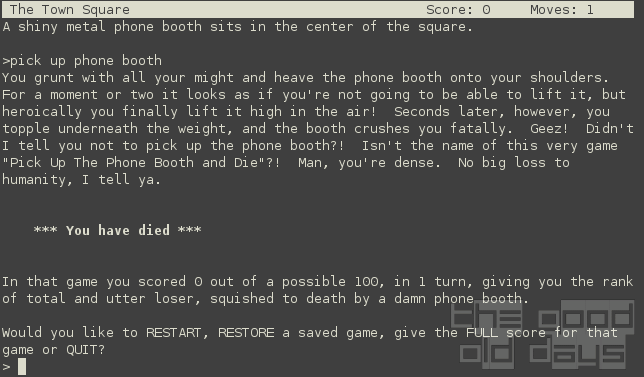 Pick Up the Phone Booth and Die (PUTPBAD for short) is one of the most infamous pieces of self-referential interactive fiction ever. The game only has one location, one object and one puzzle. You start the game in a non-descript town square in a non-descript New England town with no idea who you are or why you're there. A phone booth sits in the centre of the town square, mocking you with its presence. If you pick it up, the game warns you, you'll die.

The game doesn't lie. Telling the parser to pick up the phone booth will end the game with the protagonists death. So will any aequivalent statement ('get phone booth', 'take phone booth'), including every text adventure player's favourite: 'get all'.

I guess it's impossible to really evaluate this game by normal standards, so I'll just tell you about my experience with it. My initial idea to solve the game was not to pick up the phone booth. However, “don't pick up the phone booth” isn't understood by the parser. So isn't “move on”, “ignore phone booth” or “leave phone booth alone”. Surprisingly enough, the actual solution is even simpler - yet I would have prefered one of mine.

The joke is obviously to make fun of the genre tradition to pick up everything which isn't nailed down, and if it is, to find a way to get the nails out. Good idea, good execution. The game delivers what it promises. Yet, it didn't get more than a small inward smile out of me when I found the solution eventually. The joke isn't a very strong one. That is why I listed a few of my own ideas - those would have poked fun at the compulsive urge to examine and manipulate everything found around you in such games. So, the same idea, but put more broadly.

Given that the game won't take up more than a few minutes of your time, PUTPBAD is good for a quick smile without replayability (or even real playability for that matter). Recommended if you're into the genre and if you know its conventions and stereotypes.

Mr Creosote (2018-11-14):
For sure, everyone's first attempt at this game is dictated by the title. The question is just what to do after.
Herr M. (2018-11-14):
In hindsight I should have thought of it, but it was fun anyway. Probably more fun than simply following the name of the game.
Mr Creosote (2018-11-13):
Only being able to eat things carried in the inventory is Inform standard behaviour. You should have known

The actual solution is also a bit of a pushover… but well it was fun nevertheless.
[Reply]