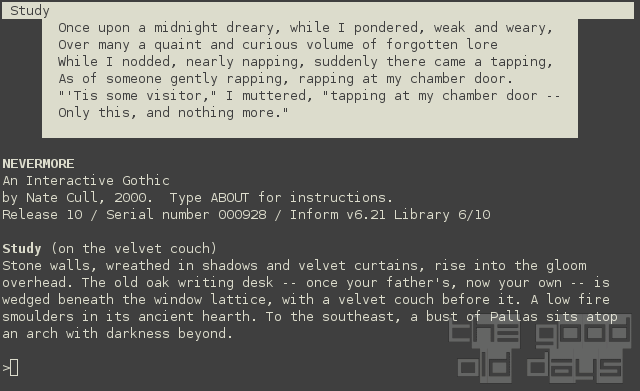 To this day Edgar Allen Poe's most widely recognized work, the poem The Raven doesn't exactly allow for easy adaption into other media. Which didn't stop various attempts, most notably the 1935 movie starring Bela Lugosi and Boris Karloff, which is a creepy piece of work on its own right, but bears little resemblance to Poe's poem other than the title and the 1963 film starring Vincent Price, Peter Lorre and (again!) Boris Karloff, which is just a painfully unfunny comedy which, again, throws Poe overboard within the first five minutes.

The obvious problem is that The Raven is basically just an atmosphere piece. There is no real narrative since the actual events (the death of Lenore) have already occured before the poem starts. A lonely and desperately sad guy sits in his study, a raven flies through his window and he gets mad at the raven repeating 'nevermore' again and again. Not much of a story to weave around that, is there?

Nevermore is the brave attempt to do just that. As the game goes on, the protagonist's dabbling with black magic which lead to Lenore's death are revealed - and the object of it all is to use those means to get back together with her. The protagonists constantly increasing weariness, which isn't exactly helped by the raven persistently following him everywhere, is a constant danger along the way.

The game's setting is a very tight one. There are only very few rooms and not too many relevant objects. The puzzles themselves mostly revolve around recreating rituals documented in magic books. Not that much of a problem, the key is just finding the right ingredients. These puzzles are alright and not too hard, but they could have been a little more imaginative.

As far as criticism goes, that is pretty much it, though. Nevermore just works - not shying away from Poe's name (a huge risk, after all) payed off!