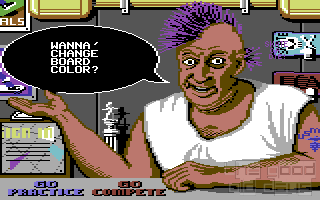 Yes, yes, we all know skateboarding is not a crime. The point is: Nobody said it is! So what's the point of repeating that mantra again and again? That whole pseudo-rebellious attitude is just silly. Personally, I find the whole skateboarding stuff to be as much of a type of conformity as the next one. Regardless of this rant, I don't object to the idea of a skateboarding game. Especially not a fun one like this.

Skate or Die is a game made very much in the same vein as California Games. You compete in five events. Freestyle is the classic half-pipe with the player trying to make 'cool' jumps and spins and getting points for it. Highjump is another simple half-pipe challenge: work up your velocity and jump as high as you can. Then, there are two kinds of races: The basic one goes down a hill against a clock while 'Jam' is a race against another skater through streets and backyards. Finally, there is Joust which is two skaters in an empty pool trying to beat each other up American Gladiators style.

Great music and funny animations make this a very entertaining game. The latter almost make it too much fun to have your avatar fall off the board or crash into something - which will obviously not do any good to your score.

Ultimately, the game shares one inherent problem of many of those multi-discipline games: not all of the parts are equally entertaining. Highjump, for example, is just a stupid joystick waggling exercise. Joust could be fun, but I can't get the hang of it at all. So we're down to three out of five. Which isn't a lot if you're looking for something lasting. As a short diversion, Skate or Die is excellent, though. Definitely one of the better examples of the genre.