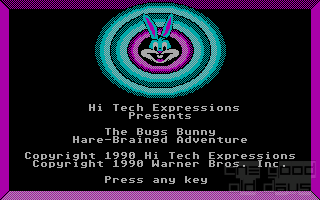 The game seems to be loosely based on the Merrie Melodies cartoon Hair-Raising Hare. If you've seen it (and that's quite likely, as it's one of the more popular ones) you will know that Bugs was lured into the castle by a female rabbit robot (and I won't discuss the hare/rabbit problem here, as the guys behind Bugs Bunny deliberately mix those terms up) and is supposed to be fed to the big hairy monster. Other than in the game in the original cartoon there's only one of these monsters. It's referred to as “Gossamer” - however in the game there's severel of them. I've seen up to three of them in the same room, considering the size of the castle and how often one is met there must be well over a dozen of them here. But well, as I said - the game is only loosely based on the cartoon.

As I mentioned earlier, the game is not bad. It has a simple concept (collect things, don't get caught), funny characters and works very well on the technical side. Considering the items you can collect and put to use the game would today be classed as an adventure game, well... action-adventure, but still. On the other hand it would be 3D then and probably not be half as fun. But that's beside the point. The gameplay is arcadelike, but as you don't play for points only, but for a “true” goal (escape by collecting the keys) I wouldn't classify it as an arcadegame. 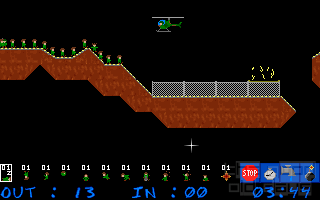