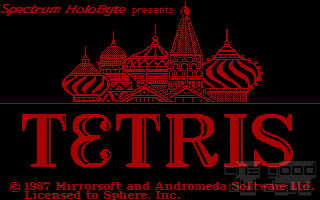 Turn it, move it, drop it - a day in the life of crane driver Carl. Noone ever asks him before they deliver yet another palett of bricks. Because if they did he would have told them of the problems with them. They never, NEVER come sorted. It's a mess - a real mess! His co-workers don't seem to have any understanding for his problems either. They just put the bricks on the hook and then it's up to Carl to see how he can pile them up. “It's so bad that I can see them in my sleep,” poor Carl says. “Pink ones, yellow ones, green ones - and then the sounds. The sounds! Bleep. Bleep. Bleep.” After saying that Carl puts his head into his hands and sobs.

Carl is the hero of Tetris. Of course you have never heard of Carl, because noone ever speaks of him. Noone speaks of the poor crane driver behind the scenes. There's thousands of reviews of Tetris - and have you ever read of Carl? Just a single line? No, of course you haven't. Well, now you have. So you better think of Carl the next time you play Tetris.

I'm a bit unsure about really repeating the concept of this game. It seems kind of hard to believe to me that there's anyone out there who hasn't tried Tetris yet. But then again... maybe there are some out there and just because everyone thinks what I think they never get an explanation and go like “Huh?! What the hell is that about?” So here it comes:

The subject of Tetris is completing lines with blocks that are falling down. These blocks are made up of four squares. As you might or might not know there are seven ways of connecting these four squares. These seven possible figures are the tiles you get here. They appear randomly one at a time and fall down at a speed according to the level you're in. You can move them to the left and right, turn them or drop it to the bottom. Everytime you manage to complete a line the line blinks and vanishes giving you bonuspoints. Every ten lines you manage to eradicate means advancing into the next level. This only means that the bricks are dropping faster and that the background changes. The tiles lying on the floor stay there. Once the bricks reach the top the game is over.

The game has been cloned and ported over to several systems. I would go so far as to say that this might be the game with the most versions out there. It also inspired many similar games that pick up the idea and do it in 3D, with colors, fivesquare tiles or whatever.

Let me say some things about this specific version. It's hard to speak of “official” versions, but this could be seen as it. Sort of... It's the official release for PC by the company that had the copyrights for this system. It is however not the first version for the PC (for a short overview over the story behind the copyrights see the wikipedia article).

So... of course it's hard to compare the “original” (I'm just calling it that now, I already demonstrated that I know that using that term is a bit delicate) with clones. The gameplay as such is okay, some clones later added a little more comfort like not instantly dropping but increasing the speed of falling when you press the drop-button. Also you cannot see the next tile in this version (it looks like you should be able to see it, but you don't). But it's still very playable. I did notice slight technical problems running this game in DOSBox. It works, you can play it - but not all graphic versions seem to be playable (CGA and EGA work though), further the highscoretable seems to be messed up. I acquired another version of this from a different source but noticed similar problems - so I'd say you will just have to live with it. The game as such works perfectly well though.

I have to say that this is definitely not my favorite version of Tetris. I enjoy others more. Still - a good game.

NetDanzr:
Feel free to share anything about Tetris (1989) here!
[Reply] 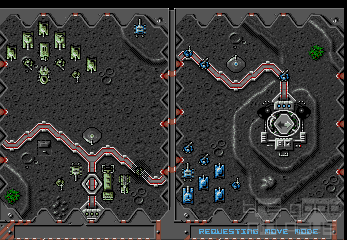