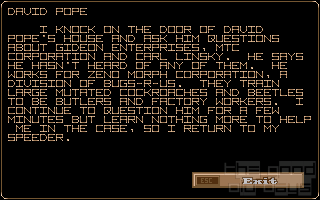 Einstein was wrong: the people living after World War 3 (which happened in 1998) aren't fighting with pointed sticks and stones. It's still guns. The whole world is in fact still very much the same as we know it. If it weren't for a few details: Half of the population has mutated because of the high radiation and people are using flying 'speeders' instead of cars.

Tex Murphy isn't a mutant, but he has such a speeder. That's the only 'modern' thing about him, though. His trenchcoat, his whole appearance would fit more into the 1930s than in the present of 2037. To complete the cliché, he's a private investigator living in San Francisco (Los Angeles would probably have been too obvious...). Who else but a good-looking, young woman could possibly walk into his office and provide him with an assignment? 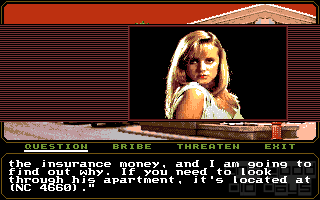 The woman's father, Professor Carl Linsky, has jumped off the Golden Gate Bridge. The police believes it to be suicide, and all evidence backs their theory: there is a goodbye-note and a witness said there was nobody else near when the old man jumped. Sylvia, his daughter, doesn't believe that, though. She's convinced he's been murdered. But what are her motives? She doesn't seem to care much about the death of her father, but more about the life insurance over 1000000$ which is null and void in the case of suicide - but not in the case of murder.

So... was it the daughter who killed her father to get the money, faking suicide without considering that this will prevent the sum from being paid? Was it one of the Professor's love interests? Is it somehow related to his job? Or was it really just plain suicide?

Sounds like the plot of an ordinary mystery Adventure. Mean Streets may be an Adventure, but it isn't ordinary. Instead of 'plain' point & click or IF, what we get is a mixture of Adventure elements (like interviewing suspects and witnesses and searching locations), action (gun fights) and flight simulation (travelling with the speeder). 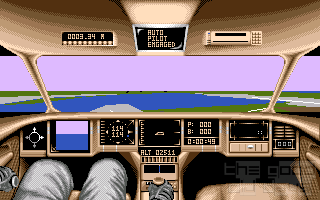 If there is another game which comes close to the idea, it's Mercenary. Like there, you start out in your flying vehicle, looking at the surroundings in 3D view, and travel through the 'world' by the help of navigation coordinates. Arriving at the target locations, you talk to people or get objects for later use. That's where the similarity ends, though. Questioning people and collecting evidence plays a much larger role in Mean Streets. The traveling can even be skipped by using the auto pilot. And I guess everybody's happy about it since the flying is..... boring. There is no other word to describe it.

There is still the gun fighting, though, and these sequences can't be avoided or turned off. In very simple arcade style, you're walking from left to right while an unlimited number of thugs armed with pumpguns enter the picture from the right. Shut your brains down and shoot your way through. Good that it's so easy, that way, it at least doesn't frustrate the player - because it's certainly not fun.

The Adventure parts are fortunately the core of the game. There are basically three types of locations: interviews, searchable and red herrings. Questioning someone, a photographed portrait of this character appears on the screen (one of the game's designers appears as Tex Murphy by the way). You can ask them anything - provided you know what to ask about, because you're not given choices, but you have to type the topics in with the keyboard. If you don't get the information you want, you can threaten or bribe people, but that isn't a wildcard, either, of course. When there is nobody around, you can search a location. In these scenes, you see Tex like in most Adventures, walk around the room and leave no stone unturned. Finally, all you get on some certain locations is some text without the possibility to do anything. It usually means you've come to a dead end. 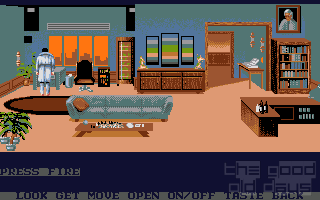 On the technical side, you'll often find this game referred to as revolutionary. That's really exaggerated. The use of digitized photos is nice, but it wasn't new. There are a few lines of recorded speech, but those of of very low quality technically, considering the sound capabilities of the Amiga. The music is nice, but only plays rarely. Overall, the technical ideas of this game were certainly ahead of its time, but the execution is average at best.

What really matters is the contents, though. Skip the flying, sit through the fights and what you get is a mystery Adventure with a nicely developing storyline. It's long enough to keep you occupied for a while, but that's really because of its length. The difficulty is quite low, you just always need to go to every place you're told about and ask the right questions there. The few puzzles (less than 5 in the whole game) would have been very easy, but you're also always told about the solution (problem: “I need at least a 9 foot pole to get this”; next room: you find a ten foot pole). If you're the lazy type who is not used to take some notes, you'll quickly be lost on the other hand. Just like a real detective would be. 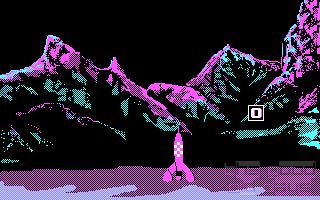