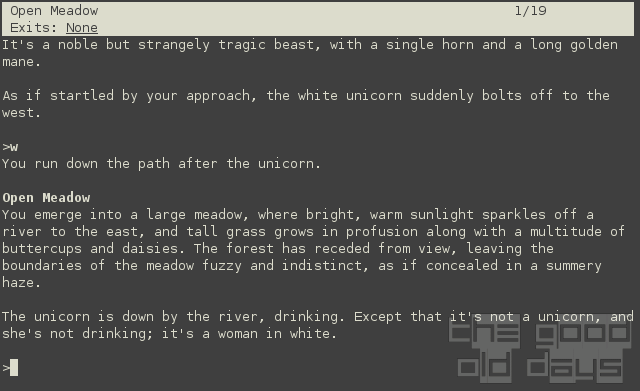 You start out in a snowy wilderness on some sort of quest. What this quest is and how it is motivated, you don't know. First, there are more pressing issues, like finding a place for the night and not freezing to death. And then finding something to eat and drink. Every time you manage to temporarily solve one of these issues, the game rewards you with a flashback or a dream sequence which will tell you more about yourself, your mission and your life. Or it will confuse you even more as a unicorn turns into a woman who turns into a flower. Or as you encounter a wolf who behaves like a dog, but really seems to be human.

Snowquest expects a lot of faith and patience of its players. The survival adventure it starts out as isn't bad, but it isn't too exciting, either. The location description are competent, but (as has to be expected of such a setting), everything looks pretty much the same and the scenery is mostly empty. There are puzzles, but they're bland. Oh, another chasm I need to get across? Oh, another conveniently placed tree whose branches are laden with snow? The highlights, if any puzzles deserve that attribute, involve digging through masses of snow to find random items which then can be used in some logical way. The worst cases are borderline nonsense which the player will nevertheless have not much trouble figuring out, because there aren't that many scenery objects and carryable items to try combining anyway.

Obviously, this is a game written for its storyline and not its puzzles. Which makes it even more tragic that in the end, although all threads get tied and connected in the end, it leaves a mixed taste. The plot stumbles from one cliché into the next. So it's a quest for a mystical magical artifact. No, it's in fact a post-apocalyptic world in which knowledge of our technology has been lost and is now considered magic (the old Planet of the Apes formula). Oh, and you find a body which turns out to be... are you serious? No, all this has been a dream / vision, too. In fact, you've been in a plane crash on the way to deliver a top secret parcel. Or is it? Same with the motifs used in the dream scenes: a unicorn, a flower, a burial – seen all that done to death.

The fact that one of the flashbacks is a completely non-interactive conversation in which the protagonist's mentor flat-out tells the player what to ask next – while any other topic or action is simply rejected – doesn't help, either. Why not simply print the whole conversation on the screen without the pretense of interactivity if there isn't any anyway? This mixes especially badly with the author's comments about having been forced to cut things due to the format's size constraints. Here's a lot of useless game logic you could have cut and even won in the process!

And then, in the end, the game suddenly expects the player to make a fundamental decision about whom of the characters (who have been there all along, just in different incarnations) to trust and whom (literally) fight. Without really giving all that much of a chance to figure out which decision could be the right one. So the game's climax turns out to be a pure game of chance. And even apart from that, the whole endgame is kind of a letdown, because there has been a long and intensive buildup with various planes of reality – and then it all gets explained away in just a few sentences. Another typical problem of authors trying themselves at surrealism: Just leave the readers in the dark – at least a little! This always works out better than any explanation you can give.

This game was a contender in the Interactive Fiction Competition 2009 where it placed 3rd out of 24. The author released another version with an updated ending later on. 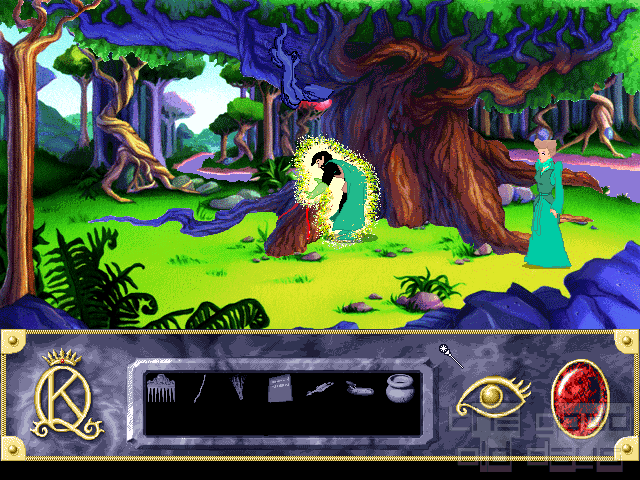