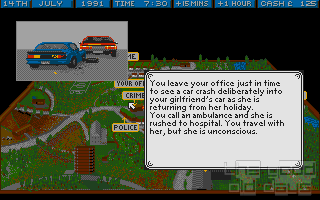 So, apparently, I'm playing a guy called Steve. Steve's dad is the prime suspect in the murder of David Walker, his business partner. Since the police is incompetent (surprise, surprise), Steve has to prove his old man's innocence. Let's begin! 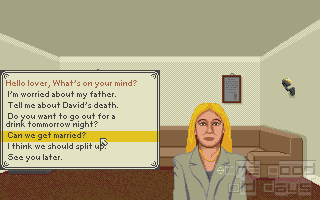 I've only just met you, but already I can't wait to replace you with another non-descript 'girlfriend'

After going through Steve's incredibly plain address book (with entries like 'girlfriend' – very convenient for people who can't be bothered to remember these ever-changing names) and checking the records in his dad's computer, I decide to go 'home' first. Turns out Steve is still living with his parents. Now I'm wondering how old he's supposed to be. Steve's mum seems to take it all rather well. She even makes Steve some fresh cookies. Next, I decide to have Steve vandalise the church. Hint: This is not the greatest idea in the world. So let's check out that generic girlfriend. She tells Steve he's mad to suggest to get married, because they're not old enough. Although she looks just as old as his mum. She also refuses to split up. Women!

Anyway, back to the actual investigation… Steve's dad gives him his actual first lead. Some bloke who sits around in the pub all day offers some advice. He will find out more things as the game goes on. How he does that without ever leaving his bar stool? That's his secret. Steve sits down in front of his dad's computer instead and plays some Arkanoid. Frustrated about the insane difficulty, he decides to browse the Internet a bit. His favourite BBS offers some interesting news. And the police servers are ripe for some hacking… 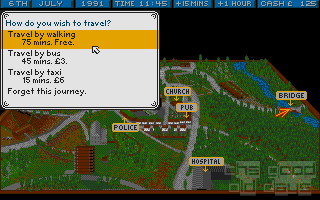 This money/time trade-off management is really going too far

There is actually some interesting stuff in the investigative methods and means available in Crime City. The inclusion of computer technology, including the virtually unknown Internet, is definitely a plus. You can also involve your strange girlfriend and your mother, asking them to visit people or do other things for you. You can follow suspects to see if they behave suspiciously. You can try to break into buildings to search them.

From there, though, it goes straight downhill. The inclusion of RPG-like character abilities and the time management is questionable at best – some people may appreciate the general idea that Steve needs some practice before being able to overcome a thug in hand-to-hand combat or before he can pick a serious lock. In gameplay terms, this not only feels out of place, but leads to serious issues. Namely with money (training is not free…). This resource being limited leads to a rather unlikely mini-game: stock market trading. I.e. crucial steps to progress in the game depend on randomised gambling. You can do everything right investigation/plot-wise, but fail to make the right bets and your game will still be over. Pure frustration. 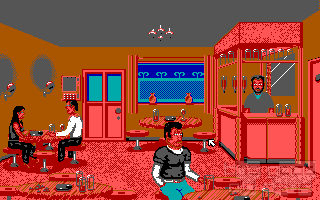 Worst of all, though, the bland characters and the unengaging story prevent any kind of emotional involvement. The borderline moronic dialogue with its displaced attempts at humour becomes annoying almost immediately. The whole investigation feels sterile and impersonal. I keep coming back to this 'girlfriend' entry; if that 'girlfriend' is not even worth being named and acts the way she does, I just don't care when an attempt at her life is made later in the game! Crime City feels like a technocrats vision of a 'perfect world', with people just being there for a particular function they are supposed to fulfil. Even when you have cracked the case (if you're that patient…), all the police has to offer is something like 'You have collected enough evidence to convict the real murderers. Thank you.'

The conversion from the Amiga original works reasonable well on a technical level. If you select the VGA version, you will at least be treated with half the colours of the original, i.e. 16. The reason most of the pictures look ugly is just that they were drawn that way. If you select EGA instead, you will have a hard time making anything out in the non-distinct mess. Or to stop yourself from ripping your eyes out. Don't say you haven't been warned.

It wouldn't really matter. Some games have become classics in spite of sub-par visuals. Their secret is simple: They are fun. In spite of some basics which are not completely wrong, playing Crime City is about as much fun as doing your tax declaration. In the in-game computer, you will find the announcement of another mystery adventure game 'coming soon'. The advantage of looking back at this announcement in hindsight is that we know how it turned out. The IF… label, under which this game was published, has never been used again. 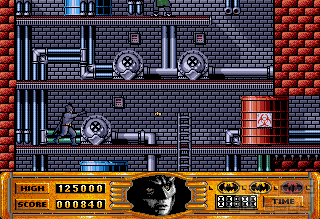