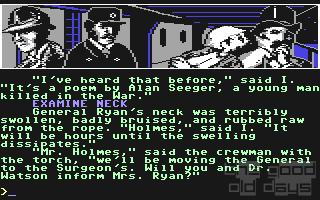 Sherlock Holmes is one of those literary figures which has transcended its original source material. At the time of rationalism, his logical deduction techniques struck such a nerve with the audience that his creator, Arthur Conan Doyle, was forced to resurrect his by that point hated and buried character. The fascination with the theory that everything can be figured out by just applying careful observation and reasoning still resonates today, even though the public image of the legendary detective is nowadays mostly fed by secondary material created by others.

In spite of Guy Ritchie and Robert Downey Jr., the person who put his mark on the character more than anyone else to this day is actually William Gillette. Although you may never have heard the name, this actor introduced the cliché of Holmes running around in his trademark coat and deerstalker hat, constantly puffing a curved pipe, which was not a major recurrent motif in the original stories. Gillette, along with Arthur Conan Doyle plus wife and several other illustrious historical figures (from Houdini and Picasso to Lawrence of Arabia and Thomas Edison), make an appearance in this game as supporting cast to Holmes and Watson. Finally blurring the lines between reality and fiction around this character once and for all.

This gathering occurs not quite by chance on a ship set to cross the Atlantic Ocean. Following the conclusion of the first world war, Gillette and Doyle (introduced as Watson's “literary agent”) propose the production of a new Holmes play in the United States. The retired detective, although not highly interested, agrees to travel for promotional purposes – lured by an unconnected letter from a young man claiming to be his son. The apparent suicide of one passenger on the first evening of the journey is just the beginning of things to follow in the next five days, which will not just put a strain on the ageing detective's health, but which will put several other passengers' lives in very real danger… 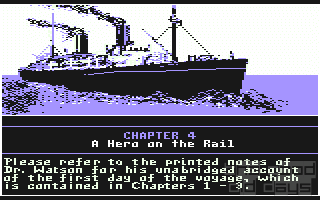 Another Bow is one of the first official Holmesian computer games, made under the short-lived software branch of book publisher Bantam, and surely, they took this task seriously. The big challenge they had in front of them was that although the adventure genre had already been shown to be capable of providing narrative (beyond “you have to slay the dragon, save the princess and find these ten treasures”), the core gameplay had always been mechanical interaction with the physical game world. Even in the mystery genre, most prominently defined by Deadline, the player's actions were still mostly about opening locked pathways, picking up objects and using them more or less appropriately somewhere else. Therefore, in the best case, we could have expected a game which has Sherlock Holmes picking locks, deciphering coded messages and disarming booby trapped mechanical puzzle boxes.

Instead, the designers took an incredibly brave step and broadly did away with this already established formula. Instead of building a physical world to interact mechanically with, they started from plot and characters and built the interaction around that. Spatial navigation along the ship? Gone, just type where you want to go, Holmes and Watson will find a path. Mold a key from clay, harden it with fire and unlock a door? No such thing will be required. In the course of the game, the player will need to pick up about five objects, and even those just for immediate examination or use. Actions therefore originate from the narrative need (which, honestly speaking, often feels more like a pseudo-historical version of Dynasty rather than a Holmesian crime plot), whereas usually in the genre, successful actions trigger narrative snippets (in the best case) or long-ish cutscenes/textdumps (the kind of lazy design applied much too often).

This, however, is where the biggest gripe with the game creeps in. Without the gift of foresight, it is hard to know where something relevant will happen next, which is so crucial in a genre which primarily revolves around being in the right place at the right time. The designers worked around this more or less elegantly. The nicer cases provide the player with visual or aural cues (described in text, of course) to follow up on. The less subtle ones have either Holmes or Watson explicitly saying things like “Oh, by the way, didn't you want to visit X this morning?” 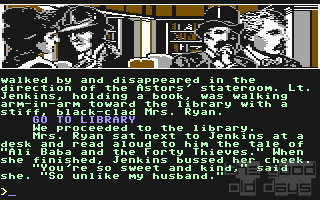 Someone had an interest in Mr Ryan's death

Such heavy hinting could lead to an all too simple game, and indeed, this is the core issue which could be held against Another Bow. It is somewhat mitigated by weaving a whole six different sub-plots into the setting. Instead of only one case to solve, there are several. Making each one less complex by itself, but brings in the task to actually identify what is linked to what first to finally piece things together correctly. Running through the game, it is quite likely to have it end in partial success: some crimes prevented, some culprits found, but not everything uncovered.

On closer examination, this puts the player into an even more passive role. Events of all those plot branches are occurring at pre-defined times. Although unfolding partially in parallel, there is given linear order to things. The player has no leverage to act, influence much, apart from observing and observing, in order to stop the actual crime just in time.

Nevertheless, this structure encourages exploration and experimentation, even in areas and story branches which you may have thought already concluded. The game accounts for this by covering some quite broad parser input handling, allowing to perform actions which make sense in the context even if they do not advance the actual solution. The narrative voice supports this as well. Being told in past tense from Watson's point of view (as the original stories) allows for some nice twists when not everything actually has to be described, although input has been accepted: “Holmes discussed with Mr X, but later broke it to me that it had been a waste of time.”

The thing is, and this may have been harder to accept in 1985 than nowadays, that the player will quickly figure out that only very specific types of actions are of explicit use to reach even the “perfect” ending. With the mindset of wanting to solve the game, Another Bow is admittedly a bit simple. On the other hand, approaching it as an interactive way of experiencing this story, of piecing together as much of it as possible through “side actions”, it is more than a worthy experiment, but rather even a pleasant experience for connoisseurs. Even if the new ways it attempted surely were not fully formed yet.

Sherlock Holmes: Another Bow boasts the Bantam (the publisher of the books themselves) name on its title screen. As a consequence (?), it is constructed a lot like a book: linear. Most of the time, you're told where to go next either directly or indirectly. And that's already most of the solution. Like in the 'real' cases, Sherlock Holmes reveals the solution mostly by observation, not by manipulation. So it's being at the right place at the right time.

The plot is set on a ship. It is shortly after the First World War. Sherlock Holmes has retired from his business. He and Dr Watson are cruising with an illustrous set of passengers. And of course, like everywhere the master detective turns up, there are plots, schemes and conspiracies going on in the background. Refer to the manual for the full background story (you'll have to read it, otherwise you'll soon be lost with all these names).

On the whole, there are six cases to solve in just five days on board (of which the first one is not playable). These cases don't take place one after another - after all, the villains don't coordinate their actions. So it is very well possible (and likely) that you don't solve them all in one game. To completely win the game, you have to succeed at all of them in a single session. But completing it is also possible with just a fraction of the overall knowledge.

The parallel structure and the result that the player has to correctly fit his observations into the various plots makes up for the linear structure and the lack of real puzzles. Furthermore, the texts are well written, the story is good. The game is told from Dr Watson's perspective, which can be a bit confusing since you're playing Sherlock Holmes. So if you examine something, you get Watson's description, not Holmes'. And sometimes, you get only the description of Holmes' action which is even less telling.

The game engine is completely text-based and the parser doesn't follow traditional Infocom standards. It is for example possible to 'talk to' people and 'go to' places. But it works well enough if you restrict yourself to the basics. The graphics aren't overly spectacular: the room in which you currently are is being shown in the background and portraits of all characters which are there, too, are laid over it. These portraits fit in style, and that's about as much as can be said about the graphics. 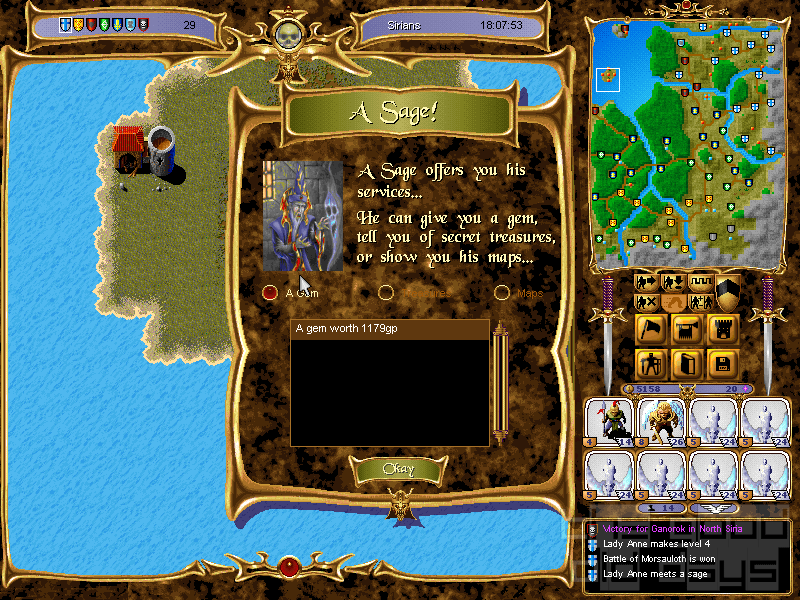