Magic of Endoria
for PC (DOS) 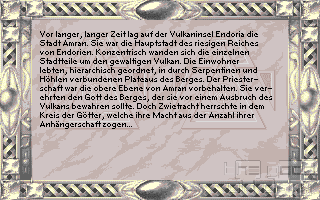 When Magic of Endoria was released in June 1994, it belonged to a relatively new kind of games which let their players build and administrate a dungeon. This makes Magic of Endoria a kind of forerunner of the well-known Dungeon Keeper. Although Magic of Endoria was released as a C64 and a PC version, both games are quite different. This anomaly was caused by the success of games like Dune 2 (late 1992) and Warcraft (early 1994) which founded the real time strategy genre and started a hype. While the C64 version stayed a turn-based game as initially planned, the PC variant received an obstructive real-time corset in order to ride the wave.

The result was a game which both the customers and the specialised press called too hard and too complex. Sunflowers tried to mend it a bit and followed it up with a 'light' variant, although this still suffered from the problems arising from changing a turn-based game into a real-time one.

Magic of Endoria's main problem lie in its controls. The first thing you will notice is that all icons in the game have a meaning which you will first have to derive and learn. With a floppy disk, it might still be clear enough (save and load), but a door might as well be interpreted as leaving something instead of (as in this game) disbanding a unit.

In addition, the player has to open and close various menus to give orders to the characters which makes it hard to launch coordinated actions between them. This is because each unit will immediately start executing its orders once they have been given, so all the others have to run after the first one. Although Magic of Endoria's menus allow to control every move, they simply cost a lot of time. A short example:

To build a science room, a builder dwarf first has to carve the exact size and shape of the room from the rock. This can already be hard, because lose rock is less stable than solid granite. The player has to click on each square of the room. The dwarf will then hack its way until it will finally report that the work is finished. To hear that, though, you have to open the menu of dwarven messages and click on the right message. In reality, you will just check the construction site itself instead and send a carpenter in the newly constructed room once its ready without listening to the blabbering of the dwarf. This guy will then build the science room, provided that the shape is correct. If not, no construction menu will appear and you have to go back to the worker dwarf to correct it.

In other places, you will be confronted with illogical menus. In a carved, but not yet developed room, a dwarf can build tiles, holes, walls or doors. Clicking on the dwarf, a menu opens which lets you select what to build in its upper part. The selected product will then be placed on all neighbouring squares. Now, to actually build this object, you have to remove it from these squares (have a look at the screenshot of 'Karl' building a cavern).

All of this makes Magic of Endoria very hard. You can build quite an interesting dungeon with doors, traps and monsters, but you will still be beaten by the computer enemies relatively quickly. MoE's multiplayer mode is more interesting, because there, each player will have the same problems. To play against other people, you need either a Novell network of a nullmodem connection.

For the Light variant of Magic of Endoria, Sunflowers tried to simplify the controls.

Unlike in MoE, there is only one level. The construction worker and the carpenter have been combined into one character. There is only one kind of mine where gold, ore and crystals will be mined at the same time. In MoE Light, you just have to click on the construction menu of a dwarf, select the room and place it in the rocks. The builder dwarf will place the room on his own, dig a tunnel there and build the room itself. Stability has been removed as a factor completely. In theory, you could build open spaces the size of a football pitch – room against room without any walls in between.

The AI of the units is unfortunately sometimes inadequate. Units will not find their way of a target or a dwarf will dig a new way through the rock, although there is already an open tunnel right next to it. The only way to circumvent these AI bugs is to take everything into your own hands again, which takes time and makes the game harder. Still, MoE Light is much easier than MoE. At the same time, though, the game also loses some of its charm, because building walls, doors and traps has become harder and the weak AI will spoil quite a bit of fun.

The original variant of Magic of Endoria is hard to play due to the issues of the controls. Those who are not familiar with the game and who do not know all the elements by heart, will most likely be frustrated. Newcomers and regular players are advised to have a look at the Light variant. 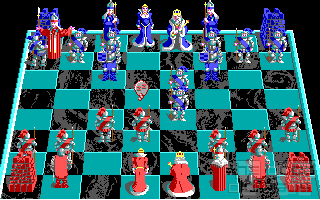