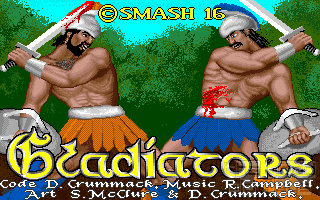 Spartacus… if that name makes you think of Stanley Kubrick, Kirk Douglas, Laurence Olivier, Peter Ustinov, John Gavin and Charles Laughton, you better cling to that memory of lush, colourful and overall impressive scenes of intricate drama. Because for this particular Spartacus, one of the last attributes which will come to your mind is 'impressive'.

In a half-hearted attempt to tell some kind of basic story, the game depicts the historical figure's escape from the slavery of being a gladiator in ancient Rome. This is presented as a series of swordfights: Using a whole four different moves, which only actually differ in the target height, Spartacus tries to slash each enemy to pieces before the same is done to him (as visible on the slowly dissolving faces on the bottom of the screen). But wait – that's not all! To liven things up, there are also four scenes (two of each kind) in which Spartacus either meets a falcon (winning strategy: block and immediately slash) or he has to avoid arrows being shot at him.

After about ten such scenes, the game simply ends with the protagonist standing on an open road running off into the distance (symbolising freedom, I guess). The following civil war is neither mentioned, nor depicted in the game. Pity, because a similarly charimingly incompetent rendition of a tactical war game, for example, might have been quite entertaining! For five more minutes…

'Charmingly incompetent' of course being quite a euphemism. It certainly takes courage to release such a game commercially! Where to start? The amateurish graphics? The clunky controls? The simplistic challenges? The complete lack of different gameplay aspects? The laughably short length? Let's skip this part and just say: Nobody needed this game even back in 1989. It has hardly become more relevant in the meantime. Some things deserve to be dead and buried. Rest in peace!

Herr M. (2013-02-02):
This game certainly has some of the most 'impressive' sounds I heard in a game for a long time: That tinny sword sounds and the eunuchs battlecry sure make for a very humorous atmosphere.
[Reply]