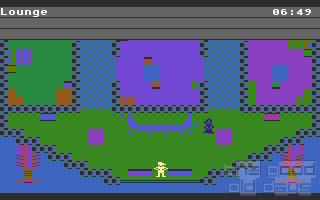 A murder mystery works very well in confined space, because it tickles the audience in a very special way – it appears 'solvable' as all the information seems to be at hand. Agatha Christie knew it when she wrote the quintessential Murder on the Orient Express and similar setups have appeared many times in the genre since then. One issue with the classic train setup is the 'confined space' aspect: A train can usually stop at any time, at the next station or outsiders can enter it. That is why Orient Express has it stuck in a snow storm in the middle of nowhere. No special events are necessary for aircrafts flying over one of the oceans in order for them to be inaccessible, making them probably even better suited for this setup. The Zinderneuf is a Zeppelin – extremely convenient due to its long travel time over the Atlantic! The airship is almost halfway on the way from London to New York when a murder occurs. The player, a detective, has got 15 suspects and 12 hours remaining until arrival. 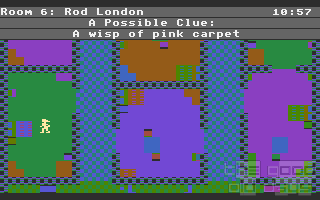 What could this possibly mean?

The gameplay consists the typical sleuthing activities: searching for physical clues and interrogating suspects. The former is a simple matter of walking around a room long enough, preferably without anyone else there at the time until the game will announce whether something has been found or not. Questioning the suspects is more complex. Not only does the player have to select the subject of the questioning, but also the manner in which to interrogate. For some suspects, a matter-of-fact tone is appropriate, but sometimes, playing dumb might get you more information (the Columbo method) – or, in other cases, playing it tough. A well-timed accusation may also reveal unexpected results.

The catch: Many of the case's elements are randomised each time the game is launched. The murder victim, the murderer, the motive, the clues and some of the relationships differ from case to case. The player herself also has a degree of influence over the initial setup by selecting one of eight different detective characters (all based on well known literature/film prototypes). The combination of the player character and the slightly customised suspects can lead to very different dynamics throughout the game.

So Murder on the Zinderneuf can be described as a beefed up version of Cluedo. Due to the additional degrees of freedom, it plays out in a much less formulaic way, though. The player walks around the airship in (accellerated) real time and so do the other (still living) characters. The game does a good job of making their actions appear autonomous and purposeful. If a character walks into the cabin of another passenger whom he has no official relation with, it will not be random, but it can be interpreted as an important observation which might be relevant for the case's solution. Of course, and that is also an important factor to make the game world appear reasonably realistic, there are also red herrings abound. Distinguishing these from the real clues and using the latter to confront the right suspects is what the game is all about. The deductions themselves, on the other hand, have to be done by the player himself (taking notes is almost mandatory): Unlike newer games, Zinderneuf will never display any thought bubbles above the detective's head giving away information which the player hasn't even reached yet. The characters' reactions do change according to how many clues the protagonist has already found, on the other hand.

Thankfully, the cases never become too complex. The Zinderneuf, although described as a giant airship in the documentation, really only houses 17 passengers: the detective, the victim and 15 suspects (for comparison: the actual Hindenburg could carry about 70 passengers). The twelve hours game time always take 36 minutes of real time, so there is a strict limit of how much time it will take up. Half an hour – that's a good choice, because it will not put too much a strain on the player's life, there is no need to ever save the game and gameplay-wise, it restricts the player enough to avoid solving the case by simply exhausting all possibilities: There is no way around logical deduction.

At a time when almost all Adventure games were still played with a text parser, Murder on the Zinderneuf broke new ground by making the interaction almost completely graphical. The player moves a small detective sprite around the – by today's standards abstract, but for the time quite adaequate – top-down view of the airship. The suspects are walking around as well, most of them clearly distinguishable by their looks alone. As for sound, the only thing audible throughout the whole game is the typical 1980s walking blips and the noise of the engine (its intensity changing depending on the exact location of the protagonist).

So from today's point of view, one could say that neither the audiovisual presentation, nor the intuitively simple controls get in the way even in the slightest. The complexity and difficulty is just right for casual hobby sleuths and the period setting works very well. Highly recommended!

Mr Creosote:
Feel free to share anything about Murder on the Zinderneuf (1983) here!
[Reply] 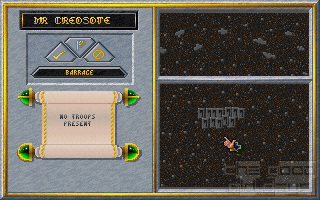