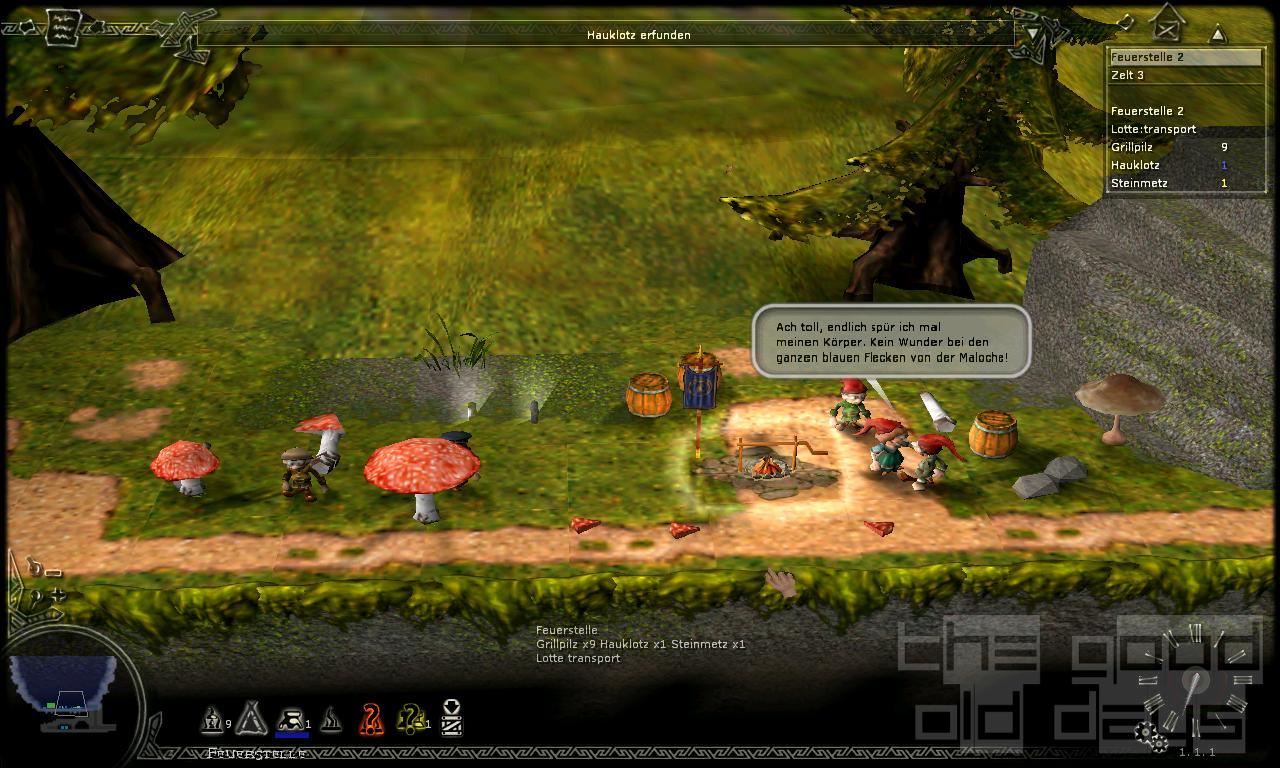 Developed by SEK and published in September 2001 by Innonics, Wiggles (released to the English-speaking world as Diggles) was highly praised by the leading publications like PC Games, PC Action and GameStar and it received very good ratings. The game failed on the market, though, because for 2001, it was too demanding hardware-wise. Even today, it can still put quite a load on dual core Pentium chips. The developer SEK tried their hand at another real time strategy game called Paraworld in 2006 and then went bancrupt.

What is Wiggles about? Wiggles is a dwarf simulation, sort of a grandchild of games like Magic of Endoria and Caveland. The plot has been kept fairly simple – the dog Fenris has run away from Odin's home. The intro shows the cute little puppy turning into a monstrosity after getting free from the chain Gleipnir. Gleipnir broke into six chain elements, of which four got lost. Odin tasked the king of the Wiggles to find those elements again in order to reforge the chain and capture Fenris. To find the best clan for this holy mission, the Wiggle's king holds a contest, complete with a grandstand. This event can be partly observed in the tutorial by scrolling all the way to the right. Interestingly enough, all the other clans somehow manage to eliminate themselves or not even to compete, like in the case of the stoned Peacers. That is why your clan wins – empty-headed and hopelessly far away from the civilisational heritage of the forefathers who forged Gleipnir all this time ago.

Well, to cut a long story short. At the beginning of the campaign, you will find yourself together with five dwarves (three male and two female dwarves) and an elf in a valley. Two dwarves shamble over to a tunnel exit and they lean that Fenris has disappeared underground right here. The elf hands over two of six rings – the rest needs to be found in the ground, specifically one in each world.

Because the fifth dwarf carries a box with firestarting equipment, you can begin by building such a fireplace. Here, you can order your first meal – barbecued mushrooms. You don't have to order who should take over this task, but you can give direct orders to a dwarf. The respective dwarf will now search the visible area for mushroom caps first. If he doesn't find any, he will take his axe and fell a mushroom. This one will be good for two caps and one trunk, enough for the cook to produce two barbecued mushrooms. Of course, you can speed this process up by ordering one dwarf to cook and another one to cut down mushrooms and to carry the caps and trunks to the fireplace. This way, the dwarves will specialise themselves, which enables them to research new inventions. The third dwarf could, for example, occupy himself with digging shafts and caverns, because the available space on the surface will quickly run out and further buildings have to be built inside the mountain.

Your dwarves will acquire skills in certain specialised fields over time. Each of the first five dwarves can acquire 100 skill points. If they get another point because of their activities, they will forget about another one. Different from Magic of Endoria and Caveland, genetics and birth control play an important role in Wiggles. Dwarves reproduce in their spare time if their sexual partner is available as well. A 100 points dwarf and another 100 points dwarf will generate a 120 points offspring. A 200 points dwarf – the genetic maximum – can therefore only be acquired in the fifth generation. Newly born dwarves inherit a part of their parents' skills. So in order to avoid populating the world with morons who only stand around and munch mushrooms, you should first prevent the birth of more dwarves by setting the work hours appropriately to first train your initial dwarves. By the way, a dwarf will live for 25 Wiggle days.

Wiggles plays out relatively slow. You will sit in front of the screen for hours only to celebrate the construction of a single new smithy, for example. Exploring previously uncharted land, a Wiggle will find random things, but they are actually random. What I mean is – let's assume a Wiggle digs a new tunnel from point A into an unknown area. You save the game before starting the work. In the first attempt, he will find a cave with three mushrooms. In the second attempt, he will find a cave with a Wuker (the Wuker is a comparatively weak monster which will attack your dwarves on sight). In the third attempt, it is an old tunnel… and so on. What you find is really completely random and it will be added to the world only then.

While your system of caves will still be fairly small at the beginning, the element of map size will turn into a serious chore at some point. The playing field extends with each additional underground level and there is no visible limit to the overall map. Diving down into the next deeper region of a map can easily take a whole Wiggle work day. Things get really annoying if you have certain quest goals to fulfil. In the jungle world, for example, there is a side quest with a locked door and three barrels. To fulfil this side quest, you first have to find the door. So you dig (my impression) around the Wiggles map for weeks. If you want to go on to the next world, but you first have to find the respective quest zones in the most cumbersome way imaginable, the fun quickly vanishes.

Conclusion: Wiggles is a nice world building simulation and it is suited for players who have time and patience. What is worth seeing in any case is the sometimes cute humor. Wiggles may not have been a big success in 2001 – but this failure resulted from the fact that the game was ahead of its time. On modern computers, Wiggles runs smoothly and it has deservedly found a large fan base in the meantime. So it may be appropriate to just say this: 'Where there is a Wiggle, there is a way!'