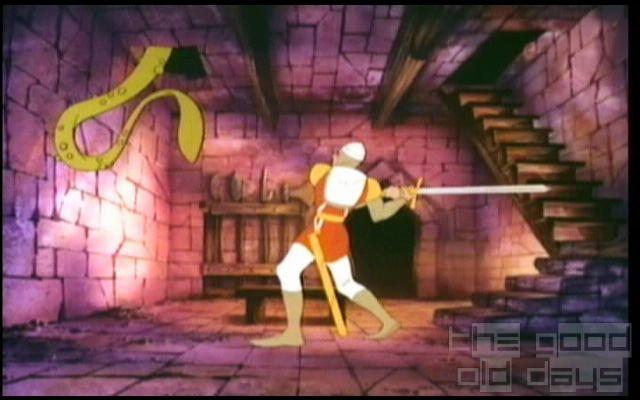 Although arcade games were often technically much more advanced than their home counterparts in past times, most lost their ability to impress. Reliance on flashy audiovisuals rarely works when even better things become possible – nothing ages as badly as yesterday's technical sensation. But then, there are those games which are so far ahead of their contemporaries that the rest of the world literally took decades to catch up. Now, in 2013, Dragon's Lair still looks as impressive as it did thirty years ago: Fluidly animated, sharp cartoon scenes never get old. Just look at something like an old Tom & Jerry cartoon – just from the visuals, you will not be able to tell when it was made; it's a timeless technique. 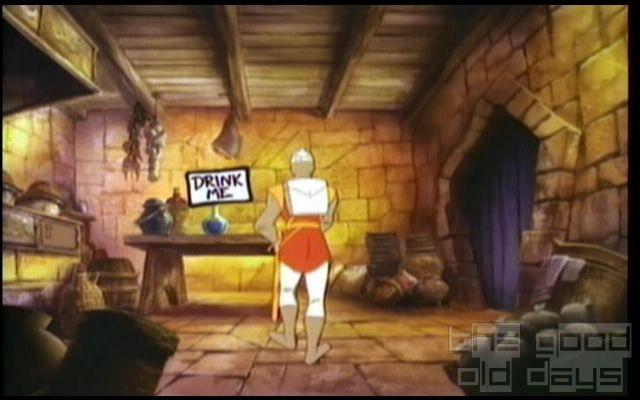 Without player guidance, Dirk will do it
Though of course, the rest of the world has at least caught up. It's just not possible anymore to relive the jaw-dropping experience which this game must have generated when it first appeared. Just think about it. The typical pixel graphics of 1983 weren't necessarily bad, but they were simplistic. The coolest thing there was at the time were pseudo-three-dimensional wireframe graphics on special displays. And then, all of a sudden, this came along.

How was it possible to make such an unprecedented jump? Had someone invented a new miracle CPU which handled a throughput by several orders of magnitude higher than anything previously known? No, the insides of the cabinet revealed a regular Z-80, as also used in home computers like the TRS-80 and the ZX Spectrum. Instead, the miracle which made this visual quality as well as the clear speech possible was the mass storage device: The game came on a laser disc – providing virtually unlimited storage capacity. Which certainly explained one side of things – how to store such a complete cartoon film – but not how it could be rendered interactively in real time.

This, unfortunately, turned out to be exactly the one fly in the ointment which split community back then as it still does today. Dragon's Lair simply doesn't render those scenes in real time at all! It is simply a cartoon film which is played to the player. Depending on the input, it will simply jump to one of several pre-defined versions of the same scene, all of which are stored on the laser disc. 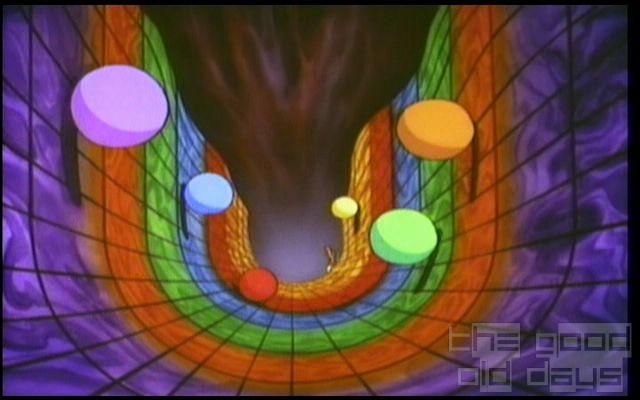 Some dangers are of quite an otherworldly nature
While the technical challenge of making those seeking operations on an optical medium appear seamless still should not be underestimated (while not exactly the same technology, just try jumping to a specific chapter of a DVD in your player – it always takes a noticeable moment), this means that the options the player has are severely limited. Most of the time, even the four directional controls and the single fire button will simply not do anything at all. It is only at pre-defined points in time that those intended triggers will make a difference – i.e. they will make the cartoon jump to another branch than the default one which appears if the player does not do anything.

Indeed, there is absolutely no indication of when input is possible and required. This may be interpreted in a positive way, because it implies the interavity is completely seamless within the cartoon, but at the same time, it makes things frustratingly hard. Using those opportunities to interact is essential, because this default branch almost always results in the death of the player's avatar.

That being a knight called Dirk the Daring, who is supposed to rescue a princess from the clutches of a typical evildoer. The game is structured into consecutive scenes, each of them containing a danger to Dirk's life. The tone is a decidedly goofy one, so Dirk could be smothered to death by tentacles, set ablaze, electrocuted or tripping into a bottomless abyss. The only chance the player has is trial & error: Entering a previously unknown scene will almost inevitably result into instant death. Only then does the player know what will happen anyway. Which leaves the question of how to avoid death; including not just figuring out what to do, but, as mentioned earlier, finding the right time to do it. Dirk can try to dodge the trap by stepping/jumping away or by meeting danger with his sword. Some unsuccessful attempt will also be rewarded with custom death animations. 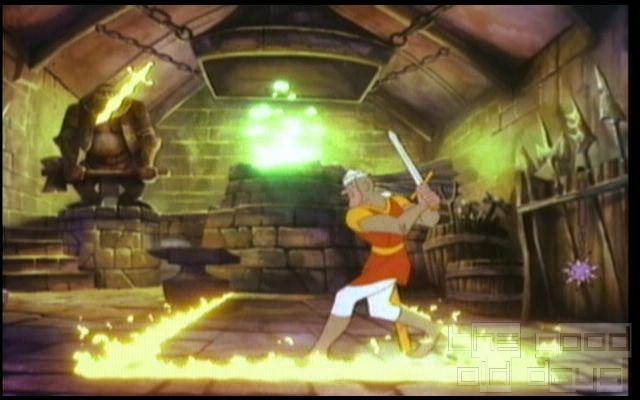 Did you seriously think the sword would help here?
One might argue that Dragon's Lair is not a very good arcade game, because the players cannot play enough for each of their coins they put in. Of course, keeping a steady resupply of money necessary is the ultimate objective of every arcade game; having a kid play for hours on a single dime certainly marks a badly designed game. The other extreme should be considered equally undesirable, though. If the average play time earned per coin only equals a couple of seconds, nobody will be willing to invest more. And this is exactly what happens in this game, because the scenes are, as explained, not really 'solvable' without learning them by heart. Even then, getting all required key combinations always right scene after scene borders on the impossible.

Actually, scraping away the visuals, it could be argued that the game is the attempt at a non-static evolution of Choose Your Own Adventure books. Each initially well-defined situation offers a strictly limited set of choices. All but one will result in instant death; in that sense, it's not a very good CYOA. Alternatively, you could say that Dragon's Lair is the forefather of the railroaded action genre. The same technique would become really huge when optical storage media became commonplace – roughly ten years later. Think Microcosm or Star Wars: Rebel Assault; they're not really anything different. Though like Dragon's Lair, they were hardly popular because of their gameplay.

What we have here is a game which has hardly aged at all, but it is not just its qualities, but also its downsides which have remained the same. As amazing the idea of an interactive cartoon may be, Dragon's Lair borders on being unplayable. The biggest irony about it might be the existence of countless ports to home systems, though: Until the Amiga version (shortened and with greatly reduced fluidity of its animations, but at least the static visuals were not completely off) came along many years later, none of the ports even tried to recreate what made this game so great; instead, the sub-par gameplay was ported and coupled with completely different (i.e. infinitely inferior) graphics. And what reason would there be left to play it then? If anything, we should remember the original experience.

Where do I even begin, Dragon's Lair is one of the very 1st FMV games to ever come out in the arcades. When it was released, no other game had gameplay like it and while the gameplay was simple and sometimes repetitive, it was fun and had the game never come out, we would never have had those quick time events in the newer games we have today.

You play as Dirk The Daring who has to go on a quest to save the princess and slay the dragon. You go into so many different rooms with a lot to do and branching paths to spice up the gameplay.

The gameplay consists of timed events which means you have to press a button quickly to perform an action in order to continue watching the scene succeed. Get the button wrong or make the wrong choice and you will get a death animation. The controls are very responsive, though it's very tricky, because you have to time it just right to avoid getting killed.

The FMV quality was excellent back in the day. Using interlaced Laserdisc video for its video source, the picture was excellent and as for the animation, the animation quality is supreme being animated by Don Bluth who once worked on animation for a couple of Disney films back the 60s and 70s. It can easily be seen why the animation is so Disney-like. 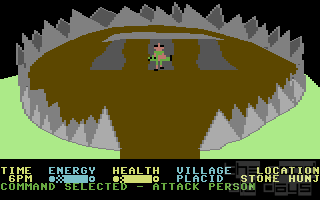